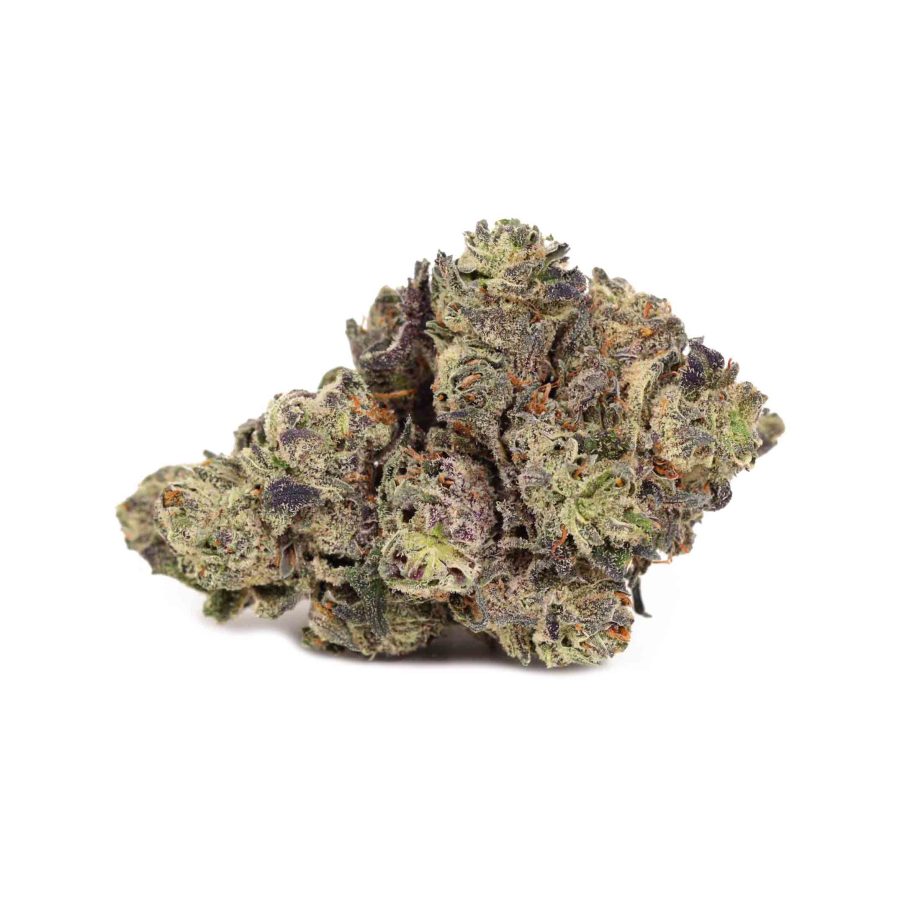 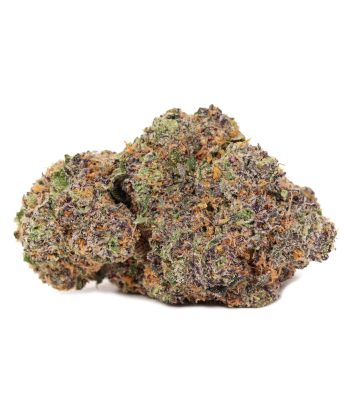 9 Pound Hammer is a heavy-hitting indica with a patchwork genetic background. It is a three-way cross between Jack the Ripper, Hell’s Angel OG and fruity Gooseberry. This relaxing bud was created by prolific breeders TGA Subcool Seeds, the same producers responsible for Deep Purple and Jesus OG. Cannabis testing lab Analytical 360 has measured 9 Pound Hammer’s potency at between 14% and 23% THC.

9 Pound Hammer is visually impressive, with large, chunky, multi-coloured flowers. The buds adhere in a dense, solid formation, with short leaves coiled tightly inward toward their central stems. The leaves themselves are a mossy green and are threaded through with yellow and orange pistils. Flowers also commonly have flashes of purple due to high concentrations of anthocyanin pigments in their leaves; the shades of purple emerge when these pigments are agitated by cold weather during the growing process. A blanket of frosty trichomes covers the buds and makes them particularly sticky.

When properly cured, 9 Pound Hammer has a strong fruity aroma with a tropical inflection. Like parent strain Jack the Ripper, it is redolent of citrus and grape. Meanwhile, breaking the buds apart gives off a strong incense-like odour courtesy of this strain’s Afghani landrace lineage. When combusted in a bowl or a joint, 9 Pound Hammer burns with a remarkably smooth smoke that tastes woodsy and piney with a hint of lime on the exhale. Notably, this strain’s pronounced grape flavour is entirely incidental to its purple hues — as with any other variety, its flavour is determined by terpene compounds while its appearance is dictated by its unique pigmentation.

This strain is named 9 Pound Hammer for a reason: almost immediately, it hits users over the head with its heavy-duty sedation. Deep breathing may come more easily and muscular tension may dissipate. This sensation soon progresses into a full-body high that may leave smokers feeling floaty and disoriented. In addition to these somatic effects, 9 Pound Hammer imparts some subtle mental stimulation — while it may not trigger intense, cerebral thinking, it can alter perception, making sounds or colours take on a new intensity. If the dosage is increased, this strain is liable to cause couch-lock, sapping energy and motivation along with any lingering pain and stress. As a result, 9 Pound Hammer is best enjoyed at night when its strong sedative effects can easily transition into sleep.

9 Pound Hammer can be of great value to medical cannabis patients as well. It can provide temporary relief from the symptoms of mild to moderate stress and depression. Its sedative, almost narcotic properties can relieve aches and pains of all kinds. Meanwhile, its ability to provoke hunger can help those who have lost their appetites due to medications or treatments like chemotherapy. As noted, 9 Pound Hammer is of particular interest to people who summer from insomnia; it can lull smokers into a deep and refreshing sleep. Because it rarely brings about the kind of recursive thinking that leads to paranoia, this strain is a good option for people who suffer from frequent panic or anxiety.

Fortunately for growers, TGA has made seeds of 9 Pound Hammer available for sale online. It can be grown indoors or out, although successful outdoor cultivation calls for a semi-humid climate with daytime temperatures between 72 and 80 degrees Fahrenheit. It is easily accommodated indoors, where its plants grow short and bushy with strong lateral branching. Growers should be sure to trim away any broad, light-blocking fan leaves in order to encourage the growth of flowering nodes on lower branches. Thanks to some very stable genes, it is also resistant to mildew. Finally, growers looking to bring out this strain’s full bag appeal should bring out its shades of purple by exposing the plants to cold (but not freezing) nighttime temperatures. 9 Pound Hammer flowers within a brief 7 to 8 weeks when grown indoors and offers growers a high yield of flowers for their efforts.

Not a strain to be underestimated, 9 Pound Hammer is an ideal choice for weekend or evening relaxation. Although its mellow vibes can be very social, it may be better suited to use with good friends rather than new acquaintances because of its tendency to inhibit conversation.