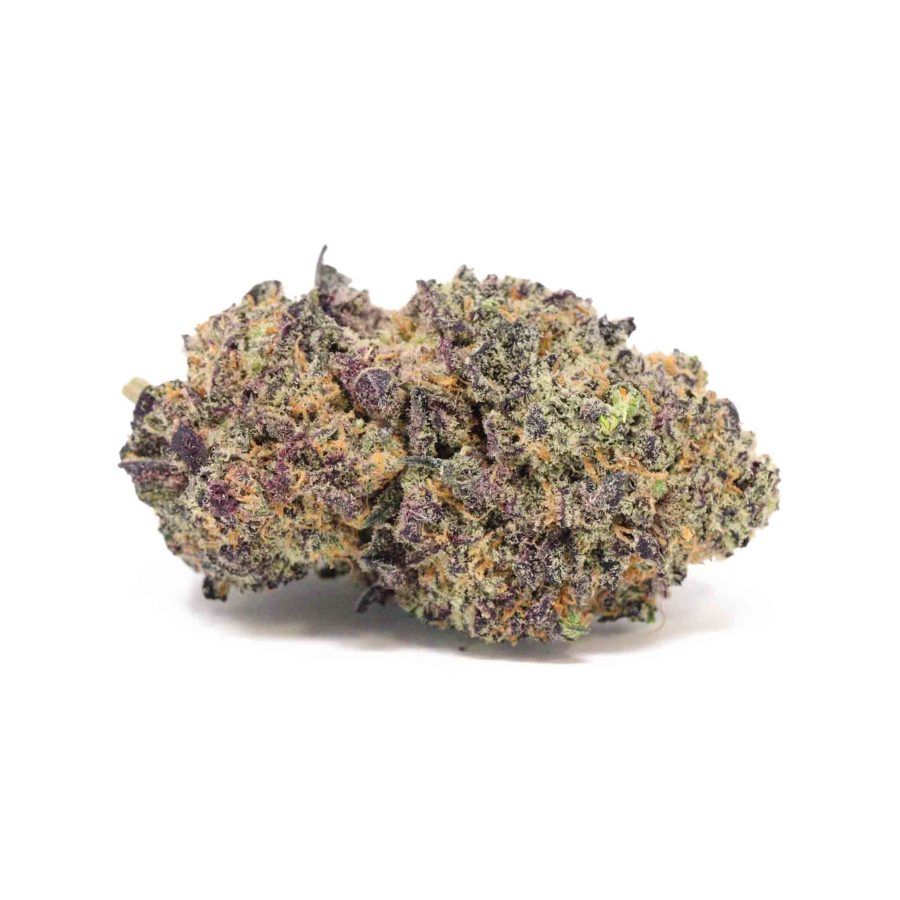 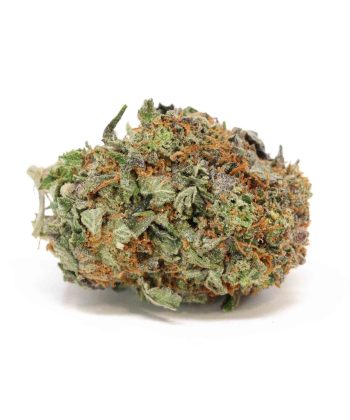 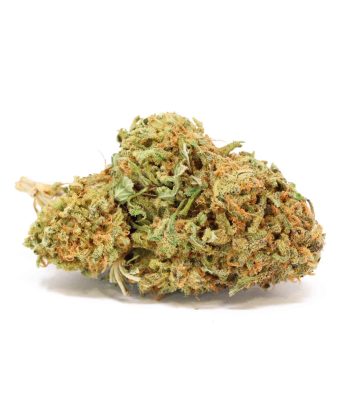 Conjuring images of tropical drinks and Elvis movies, Blue Hawaiian is a hybrid cross between two potent strains: the perennially popular Blueberry and a Hawaiian sativa landrace. Blue Hawaiian was created by Jordan of the Islands, a prolific breeding operation based in scenic Vancouver Island, British Columbia. This boldly-flavoured strain offers a balanced high that combines the best of its relaxing indica and stimulating sativa genetics. Cannabis testing lab Analytical 360 has measured Blue Hawaiian’s THC composition at between 12% and 20% with one test reaching as high as 24%.

Blue Hawaiian has small to medium-sized flowers that, once cured, take clumpy, popcorn-like shapes. Leaves are tightly coiled in a dense and heavy bud structure, typical of indica varieties. The leaves themselves are bright lime green and provide a contrast for fiery orange hairs threaded throughout the flowers. These hairs are actually pistils, reproductive structures meant to catch pollen from fertilizing male plants. In certain phenotypes of Blue Hawaiian, the buds are also streaked with blue and purple hues — these latter colours are the result of high concentrations of anthocyanin pigments (passed on from parent strain Blueberry) that are stimulated by cold temperatures during the growing process. These colourful flowers are dotted with glassy white trichomes, making them sticky and difficult to break up for joints or pipes without the aid of a grinder.

Like its cousin strains XXXX, Blue Hawaiian has a fruity, tropical scent redolent of pineapple and lemon. Meanwhile, a musky blueberry smell hangs out in the background. This strain burns smooth and easy, and its smoke leaves a woody, piney taste when exhaled. Notably, blue and purple-tinged flowers of Blue Hawaiian do not necessarily have a blueberry or grape taste; this is because the pigments that determine the leaves’ colour do not have any effect on their smell and taste.

Blue Hawaiian has a high that mounts slowly, sometimes taking several minutes to hit users with its force. Smokers may detect a marked improvement in mood, accompanied by a warm tingle that spreads gradually throughout the body. This simultaneous physical and mental relaxation can have psychedelic effects, like visual distortions or the sensation of time dilation. Trippy experiences notwithstanding, users typically feel lucid and able to focus for the duration of the high. As such, Blue Hawaiian can be a great way to complement anything from creative productivity to exercise to sex.

This strain is also valuable for medical cannabis patients. It can soothe chronic aches, pains, and even headaches. It can stoke hunger for those who have lost their appetite to illness or chemotherapy. And although an average high is free from couchlock, in large enough doses, Blue Hawaiian can bring about deep and restful sleep for those suffering from insomnia. Psychologically speaking, this strain can be effective in temporarily blunting the troubling symptoms of stress, depression and anxiety. Its sense of sustained focus can also benefit those with attention deficit disorders.

Jordan of the Islands has made seeds of Blue Hawaiian available for sale; prospective growers may also be able to obtain clippings from healthy plants in order to grow genetically identical “clones.” This strain can be grown indoors in closely monitored conditions or in outdoors in Mediterranean-like climates with average daily temperatures in the 70 degrees Fahrenheit range. Because of the sativa in its genes, plants of Blue Hawaiian are medium tall and can reach heights of 5 to 6 feet. When cultivating indoors, growers should train their plants by trimming and pruning branches early on in the growing process. Growers looking to bring out this strain’s full bag appeal should also artificially “shock” its pigments into producing vibrant purple hues by exposing the plants to cold temperatures just before flowering. As is also typical of sativas, Blue Hawaiian takes a long time to flower — growers should expect to harvest their buds after 9 to 10 weeks when grown indoors. This strain can yield as much as 15 to 30 grams (or ½ to 1 ounce) per plant.

Blue Hawaiian’s long-lasting euphoria proves that a strain’s flavour doesn’t have to come at the expense of its potency. This crowd-pleaser is great at any time of day and can be enjoyed while running errands, hanging out with friends, or simply kicking back at home with some of your favourite music.