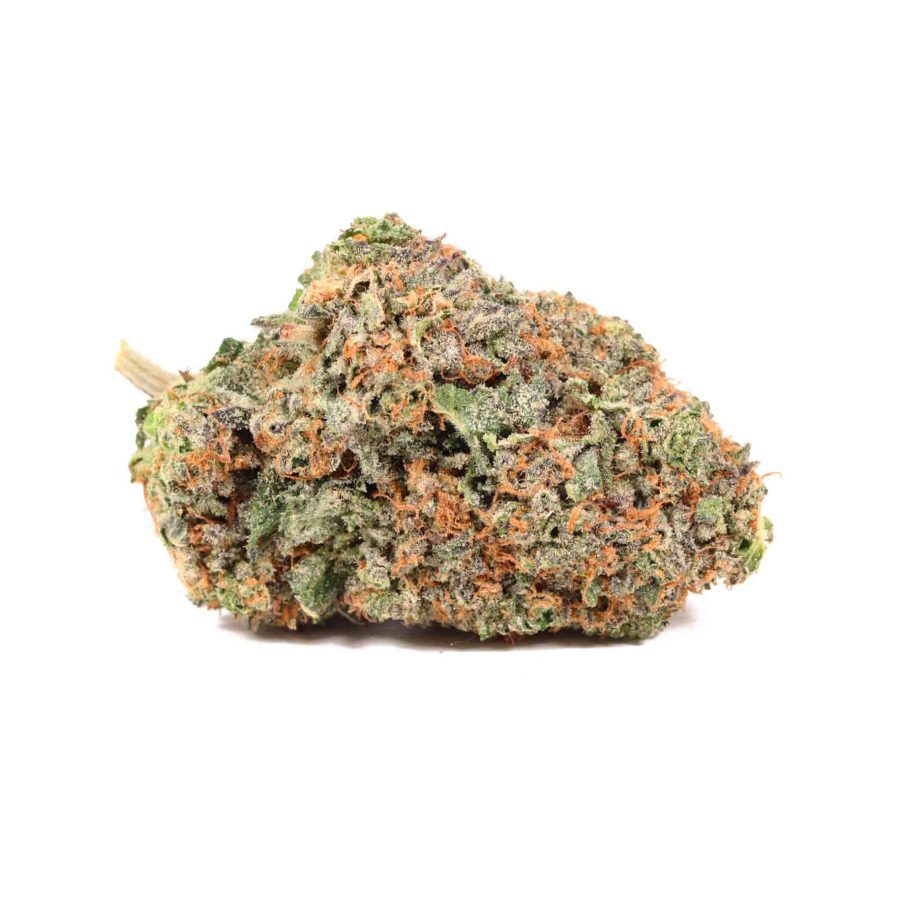 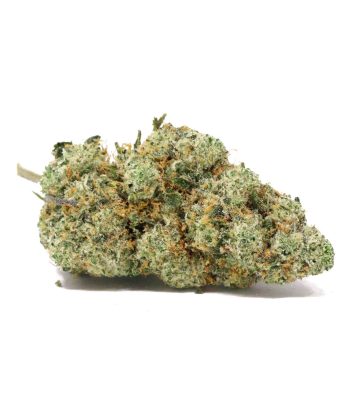 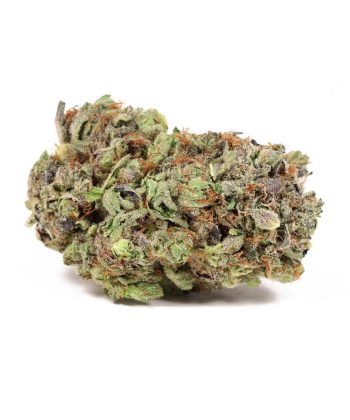 Blueberry Blast is a Sativa-dominant hybrid with a powerful cerebral high to match its bag appeal. Created by Snow High Seeds, the prolific Oregon-based breeders responsible for strains like Black Mamba, this strain is a cross between omnipresent Blue Dream and heavy, Stoney Johnny Blaze. These genes combine to create a buzzy, energetic effect alongside a complex flavour profile. Its THC levels have been measured at between 17% and 28%.

Blueberry Blast is marked by medium to large flowers that have a uniquely tapered, conical shape. The sizable buds adhere to a dense, heavy indica structure and breaking them apart calls for a quality grinder.

The mossy green leaves are shot through with hairy orange pistils. Vibrant shades of purple are often present as well; these colours come about when anthocyanin pigments in the plant’s genetics are agitated by cold weather during vegetation — the process is not unlike the changing of foliage in autumn due to declining chlorophyll levels. Translucent white trichomes coat the inner and outer surfaces of these flowers, contributing to the strain’s psychoactivity and giving the buds a sticky texture.

True to its name, this variety hits consumers with a fruity blueberry blast as soon as it’s freed from its container. This aroma, verging on overly sweet, is underscored by some sharp citrus notes. Grinding up or breaking open the flowers gives off some musky and herbal notes, reminiscent of grandparent strain Haze. When combusted, Blueberry Blast gives off a smooth and easy smoke and may taste woody and piney on the exhale.

Blueberry Blast offers a fast-acting high, often taking effect before smokers have even finished savouring its standout flavour. It launches smokers into an intense cerebral headspace in which thoughts jump from one to the next and external stimuli are particularly amplified. This mindset can manifest in a variety of ways, depending on the user’s settings and settings. In social situations, it can lead to free-flowing conversations; during unscheduled solo time, it may inspire the user to plow through errands, clean, or even exercise.

Alternatively, it can be a great way to appreciate favourite movies or albums with a freshly altered perspective. Blueberry Blast’s initial surge of energy gives way to some indica relaxation on the backend. These physical sensations, although soothing, are unlikely to bring about couch-lock, and the strain’s mental stimulation typically persists for the duration of the high. A quintessential wake-and-bake strain, Blueberry Blast is more appropriate for use during daylight, as its fast-paced effects are liable to keep smokers wired before bed.

Blueberry Blast’s mental effects can have many psychological benefits for medical cannabis patients as well. Its tendency to bring about concentration and focus can be a boon to those with attention deficit disorders. Its bright and uplifting effects can also temporarily take the edge off of mild to moderate cases of stress and depression. Because it tends to bring about recursive, cerebral thinking, Blueberry Blast is not recommended for those who are prone to panic or who have a low tolerance for THC.

Although Snow High seems to have made seeds of Blueberry Blast available at one point, they may no longer be in stock for purchase. As such, prospective growers must obtain clippings from mature, healthy plants of the strain to grow genetically identical “clones.” This strain can be grown indoors or out, although successful outdoor cultivation calls for a humid, Mediterranean-like climate with consistent daytime sunlight.

Growers looking to bring out Blueberry Blast’s trademark purple highlights should also expose their plants to cold (but not freezing) temperatures late in the vegetative stage. As is typical of sativas, this variety has a long flowering time of about 9 to 12 weeks when grown indoors and is ready for harvest in mid-October when grown outdoors.

After taking the time to nurture this strain, growers should also properly cure their plants by first drying them out for a week and then sealing them in airtight jars in surroundings of about 60% humidity.

With all the zip of Haze (which is present on both sides of its lineage), Blueberry Blast is a great option for powering through a busy day. Its potent and long-lasting effects are sure to impress cannabis novices and veterans alike.