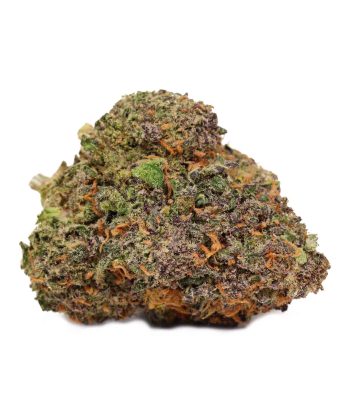 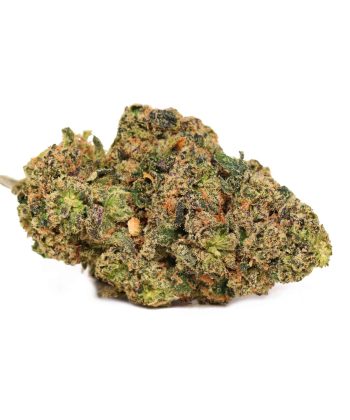 No, it’s not some new-fangled alternative to cattle dairy — Donkey Butter is an Indica-heavy hybrid with a knockout aroma. Devised by Exotic Genetix, the creators of Extreme OG, this strain crosses Triple OG with Exotic’s Grease Monkey. Donkey Butter’s dank, earthy aroma may be something of an acquired taste but consumers tend to agree on its smooth, relaxing high. Donkey Butter’s THC content has been measured at between 20% and an impressive 29%.

The donkey Butter cannabis strain stands out right away with medium to large-sized flowers that hold together in solid, conical shapes. The internal structure of these buds has a dense composition more typical of indicas, with wide, curly leaves. The leaves themselves are a deep shade of forest green, with some phenotypes even boasting patches of purple. Finally, Donkey Butter’s flowers are made even more colourful by corkscrewed orange pistils and snowy, translucent trichomes.

Once cured, flowers of the Donkey Butter strain have a gamey, earthy scent. A second whiff may pick up on some woodsy, pine-like notes as well. Breaking apart or grinding these dense flowers can reveal more of an intense, gasoline-like odour, possibly passed on from grandparent strain Gorilla Glue. When it’s burnt in a pipe or a joint, Donkey Butter can give off an acrid, eye-watering smoke that may be somewhat harsh on the lungs. On the exhale, this thick smoke has a pungent flavour with some light herbal traces.

As with many other mostly indica strains, Donkey Butter has a high that mounts slowly. Several minutes after coughing on its heavy smoke, users begin to feel head-focused sensations like a constricted feeling around the temples or some flushing in the cheeks. Eventually, these unfamiliar tics die down, allowing smokers to become aware of some distinct changes in cognition. Ideas may move more quickly than usual and may seem to have a new kind of intensity. Similarly, users may begin to make free associations or group their thoughts into categories. This cerebral edge can help accomplish work on open-ended artistic projects or brainstorming sessions. In the right set and setting, Donkey Butter may even induce trippy sensory distortions like a flattening of visual depth perspective or an uncanny feeling of time dilation. Those who are so inclined can maximize this psychedelic mood by indulging in some moody music or a visually dynamic movie.

Within about an hour (or sooner, if intake is increased), Donkey Butter’s body high begins to set in. Smokers who are out and about may suddenly feel weighed down and sleepy and may want to make a mad dash for home. Those who are already lounging in comfortable surroundings, meanwhile, can begin to feel as if they’re sinking into the furniture. Indeed, as this Stoney feeling intensifies, it may undo much of the strain’s initial mental stimulation, leaving consumers able to do little more than binge-watch, snack, or nap. Because of its eventual descent into sedation, Donkey Butter is recommended for afternoon through evening consumption.

Donkey Butter’s slow, mostly sleepy effects can also have several benefits for medical cannabis patients. Its happy, upbeat mood can be a temporary relief from some of the symptoms of stress, depression, anxiety and even PTSD. The strain may also eliminate physical pain, whether it’s temporary, due to injury or inflammation, or to chronic conditions like fibromyalgia or COPD. Additionally, Donkey Butter’s tendency to induce munchies can serve as an appetite stimulant for those dealing with digestive conditions or with invasive treatments like chemotherapy. In high enough doses and relaxed circumstances, Donkey Butter may even be an antidote to insomnia. Because it has a relatively low risk of disordered, paranoid thinking, this strain is a good option for patients who are prone to panic or who have a low THC tolerance.

Although seeds of Donkey Butter have been made available for sale online, supplies do not appear to be regularly stocked. Those who can obtain the strain can grow it indoors or out, with outdoor cultivation calling for a semi-humid climate with daytime temperatures between 70 and 80 degrees Fahrenheit. These indica-inflected plants have a short, bushy silhouette and may call for occasional pruning. Gardeners who want to highlight Donkey Butter’s purple potential, meanwhile, should expose the plants to cold (but not freezing) temperatures just before flowering begins. This strain reaches its flowering stage within about 8 to 9 weeks.

A memorable string with a hard-hitting body high, Donkey Butter is a must-try for indica fans. It’s just what the doctor ordered for winding down at the end of a long day.