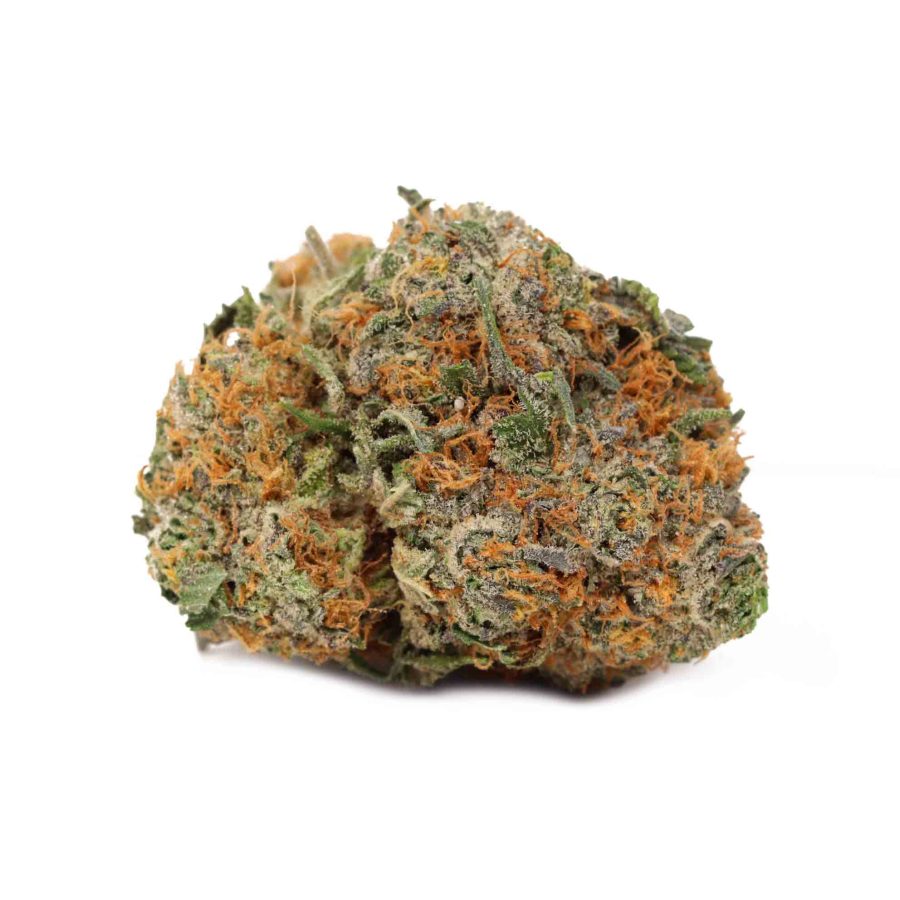 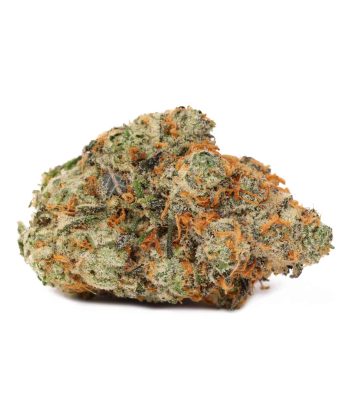 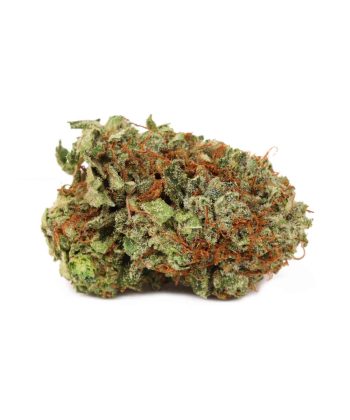 Named after the favoured treats of the popular anthropomorphic dog detective, Scooby Snacks is a popular indica-leaning strain created by prolific breeders Archive Seed Bank. This hybrid is a cross between Face Off OG and Girl Scout Cookies Platinum. It offers smokers a sublime balance of effects before melting into smooth sedation. It also has a dank, musky flavour and a THC content measured between 20% and 28%.

Scooby Snacks stands out with medium to large flowers that cling together in tapered, pinecone-like shapes. The buds maintain a dense indica structure with a solid central core composed of small, broad leaves. These leaves themselves are a frosty shade of lime green and are set off in contrast by vibrant orange pistils. Finally, a thick layer of trichomes covers Scooby Snacks’ buds, accounting for their potency and making them very sticky to the touch.

Scooby Snacks has a powerful aroma to match its standout visuals. An initial whiff of the cured flowers may pick up on a rich, earthy scent with distinct notes of pine. A closer inspection might pick up on some toasted, nutty odours as well, possibly passed on from Girl Scout Cookies. Meanwhile, grinding up these flowers yields a sweet tang, similar to black licorice. When combusted in a pipe or a joint, Scooby Snacks gives off a smooth and light smoke. On the exhale, this smoke leaves behind a fruity flavour with traces of coffee and cocoa.

The high from Scooby Snacks sets in soon after the strain is ingested, hitting smokers with a feeling of pressure around the eyes and temples. Consumers also report some initial flushing in the cheeks or an increase in salivation. Once these odd sensations become more familiar, users may tune in to the fact that their cerebral activity has kicked into a new intensity. Ideas that might not otherwise hold any interest may suddenly seem fascinating; similarly, heretofore unseen connections and commonalities between concepts can occur to the enlightened user. As such, Scooby Snacks can be a great way to open oneself up to work on detailed work-related tasks — it may even inspire you to solve a mystery or two like Scooby-Doo himself. For smokers who aren’t feeling quite as motivated, this strain can simply supply a pleasant background buzz as you go about an otherwise ordinary day.

After about an hour, this strain’s trademark indica relaxation begins to creep in. Users may feel somewhat weighed down and may find that extended physical exertion is more difficult than before. This dreamy mindset can be so pervasive as to dull some of the mental edges that mark the strain’s initial high. At this point, smokers can experience varying degrees of sensory distortion, including a flattening of depth perception and a feeling of time passing more slowly. If the dosage is increased, meanwhile, the sedation from Scooby Snacks may even lead to couch-lock, making any activities other than lounging or snacking seem somewhat unappealing. Because of its gradual decrescendo in energy, Scooby Snacks is recommended for use at the end of the day or beginning in the early evening.

Scooby Snacks’ recreational benefits can have some utility for medical cannabis patients as well. The cerebral mood that comes with its onset can help those with attention deficit disorders to focus on a single task. Additionally, its upbeat properties can help those struggling with stress or depression to pass the time more presently and mindfully. On the physical side of things, Scooby Snacks can alleviate both mild and chronic aches and pains. Perhaps most predictably, its tendency to induce munchies can even make it a powerful appetite stimulant for those dealing with diminished hunger due to disease or to treatments like chemotherapy. Because its thoughtful effects can veer into paranoia in the wrong set and setting, Scooby Snacks is not recommended for patients who are prone to panic or who have a low THC tolerance.

Archive Seed Bank has previously made seeds of this strain available for sale online, but unfortunately for home growers, they do not appear to be consistently stocked. Instead, gardeners can seek out a reputable source from which to obtain clippings of mature plants; these can be cultivated as “clones.” Scooby Snacks can be grown indoors or out, although outdoor success depends on a humid climate with daytime temperatures in the 70 to 80 degree Fahrenheit range. Plants tend to be on the shorter side and flower within 8 to 9 weeks when grown indoors.

A fitting tribute to Scooby-Doo and his best bud Shaggy, this potent strain is an appealing strain for indica and Sativa lovers alike.