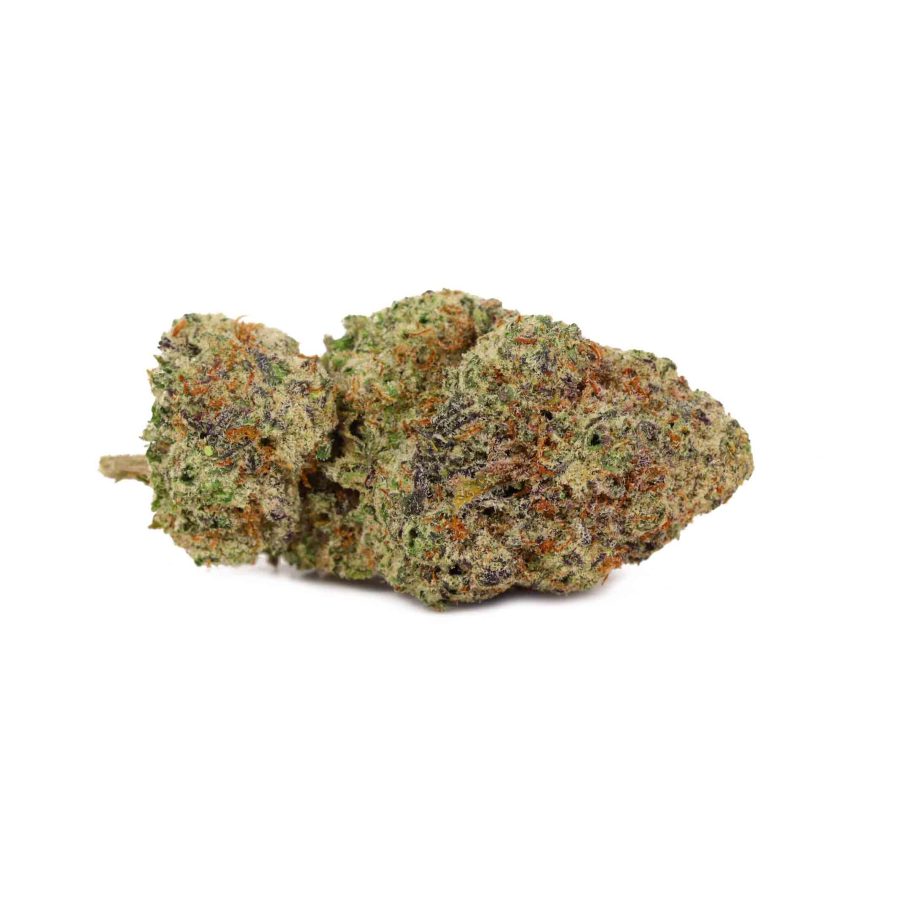 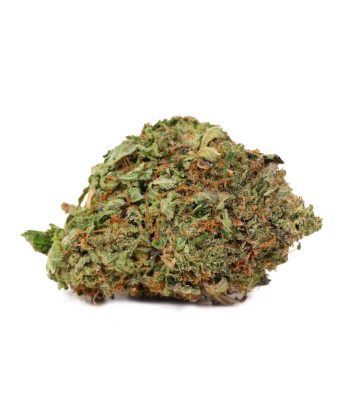 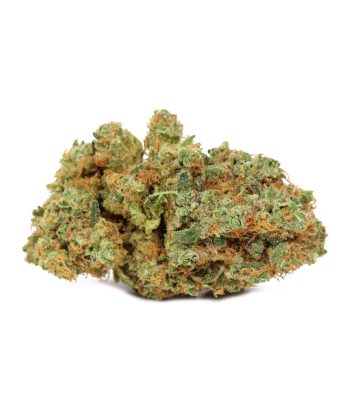 Alien Bubba is an otherworldly indica with potent sedative effects and a smooth, herbal flavour. Created by Cali Connections, the same breeders responsible for Jedi Kush, it is a cross between two popular indica strains: Bubba Kush and Cali Connections’ own Alien Kush. More of a strain to take the edge off than to get things done, Alien Bubba is a must-try for fans of heavy indicas. Its THC content has been measured at between 15% and 21%.

Alien Bubba is marked by relatively large flowers that typically have a sharply tapered shape, somewhat like miniature cypress trees. These buds hold together in the dense, compact structure usually associated with other indica varieties. This strain’s tightly curling leaves are a vivid shade of spring green and are twisted through with plentiful brown and orange hairs (which are properly called pistils, structures meant to catch pollen from fertilizing male plants). Finally, a sprinkling of crystalline trichomes covers these flowers and makes them particularly sticky to the touch.

When properly cured, Alien Bubba has an aroma that is primarily dank and musky, redolent of damp earth. There are also some woodsy notes of pine and cedar lurking underneath. Grinding up these thick flowers releases a rich, hashy odour that pays tribute to the strain’s OG Kush roots. When combusted in a pipe or a joint, Alien Bubba burns with a smoke that is surprisingly smooth, given its musty aromatic profile. On the exhale, this smoke tastes woodsy and sweet, with a mildly fruity flavour on the exhale.

Alien Bubba has a high that creeps up on the smoker gradually. Once it hits, it can’t be denied, as a concerted pressure takes hold in the forehead and temples. Users are struck by a warped sensory perception, characterized by such odd phenomena as visual distortion and a strong sense of time passing more slowly. The psychedelic nature of these sensations tends to typify the feeling of Alien Bubba’s High, which gives the smoker more of a pleasantly cloudy mindset than a productive, cerebral one. Indeed, Alien Bubba is not a strain to take before tackling a long day of work or a busy agenda. Instead, use this moody, relaxing strain to set a laid-back, intimate tone. The bud’s relaxing, friendly vibe can be a good way to enjoy some quality time with close, like-minded friends. The strain can also be a great tool for simply kicking back for an extended binge-watching session. Alien Bubba’s effects are primarily distinguished by a pervasive physical relaxation; for the duration of their high, consumers tend to sink into a state of suspended animation, unwilling (and in some cases, unable) to move. If properly relaxed, smokers can simply enjoy the way that this bud eases physical tension and distracts from the pressures and anxieties of daily life. In high enough doses, it can even pull susceptible users into a deep and restful sleep. Because of its primarily sleepy properties, this strain is best reserved for evening and nighttime use.

Alien Bubba may also have several applications for medical cannabis patients. It can temporarily improve the troubling symptoms of stress, depression, and anxiety. Its physical effects can also soothe pain, whether it’s temporary, as due to injury, or chronic, as due to conditions like lupus or fibromyalgia. Some anti-inflammatory properties, meanwhile, can take care of irritations like nausea and headaches. As described, Alien Bubba can also induce sleep, thereby serving as an effective antidote to insomnia. Because it is unlikely to bring about the kind of intense, recursive thinking that leads to paranoia, this strain can be a good choice for those who are prone to panic or who have a low THC tolerance.

Fortunately, Cali Connection has made seeds of Alien Bubba for sale online. Once obtained, it can be grown indoors or out, although outdoor growing calls for a semi-humid, Mediterranean-like climate. Its plants grow short and bushy and have strong lateral branches. Alien Bubba flowers within 9 to 10 weeks when grown indoors and offers growers a moderate yield of flowers for their efforts.

Alien Bubba’s is as enjoyable for cherished alone time as it is for mellow social occasions. All else fails, it can also be a cheap way to vacation, with its spacey vibes transporting you to another, more relaxing planet.