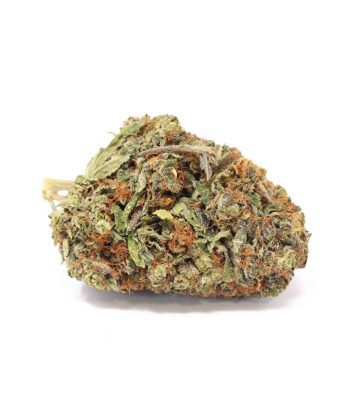 Blackberry Pie is a flavour-engineered hybrid that delivers a therapeutic, well-balanced high. It was developed by Gage Green Group, the Dutch producers who have also stabilized tasty favourite Grape Stomper. Blackberry has two potent parents: Blackberry Widow, created by the prolific Jojorizo and Crystal Locomotive, a strong blend of White Widow and Trainwreck. Blackberry Pie can be enjoyed in a variety of settings and is sure to impress even veteran cannabis users with its potency. Cannabis testing lab Analytical 360 has measured its THC levels at between 18% and 25%.

Blackberry Pie’s attractive flowers are the first sign of its bag appeal. The buds cling together in a dense, clustered formation that looks similar to actual blackberries. The mossy green leaves are tangled with dark red pistils. Some phenotypes of the strain also have large patches of purple, the result of anthocyanin pigments in the strain’s genetics being stimulated by cold weather in the growing process. Cloudy white trichomes cap off these eye-catching buds — after all, both parent strains have notoriously resinous White Widow in their background.

When properly cured, Blackberry Pie has a sweet and fruity profile. The aroma of blueberries (rather than blackberries) predominates. It is grounded out by a more dank, woodsy scent. Meanwhile, breaking up or grinding the dense nugs yields a hashy, incense-like odour. Blackberry Pie burns with a very smooth smoke and tastes like berries with a hint of pine on the exhale. Notably, there are no detectable grape flavours — this is because the anthocyanin pigments that dictate this strain’s colour do not have a corresponding effect on its taste.

The high from Blackberry Pie comes on slowly, beginning as a faint pressure around the eyes and temples. Within a few minutes, smokers may detect some changes in their perception — sights, sounds, and even smells may take on new dimensions. Visual distortions may also be common. These early psychedelic effects can be a fun way to enjoy trippy movies or music. For some, these mental effects may also manifest as a creative or analytical mindset. As the high wears on, smokers typically become more physically and mentally relaxed. Any initial feelings of mind race are grounded out by these easygoing vibes. As dosage is increased, Blackberry Pie may lead to couch-lock, leaving users content to daydream as they remain horizontal. Because of its versatile effects. This strain is appropriate for use at any time of day.

Blackberry Pie’s wide-ranging effects can also have many applications for medical cannabis patients. It can provide a temporary distraction from the troubling symptoms of mild to moderate anxiety and depression. Its lucid energy may also help those with attention deficit disorder to maintain focus on a single task. Physiologically speaking, Blackberry Pie can relieve aches and pains, whether they’re temporary, due to injury, or chronic, as due to conditions like lupus or fibromyalgia. Because of its initially intense cerebral effects, those who are prone to panic or who have a low THC tolerance should consume with caution and moderation.

Gage Green has made seeds of Blackberry Pie available for sale online. This hardy strain has landrace roots from Afghanistan, Mexico, and Thailand, making it a particularly stable crop and a good choice for newcomers to cultivation. It can be grown indoors or out, although outdoor cultivation calls for a semi-humid, Mediterranean-like climate. Growers looking to bring out this strain’s purple potential expose the plants to cold temperatures late in the vegetative stage. Blackberry Pie flowers within 8 to 9 weeks when grown indoors.

Growers should also preserve Blackberry Pie’s distinctive flavour and high resin production via a two-stage process called curing. Curing requires the freshly-trimmed buds to be hung upside-down for one week in 70-degree surroundings with consistent 50% humidity. Once sufficiently dry to the touch, the buds should then be sealed in airtight containers and stored in slightly more moist conditions of 60-65% humidity; as they cure, buds should be checked regularly for mould or mildew.

Somewhat difficult to come by, Blackberry Pie is worth picking up for its combination of physical and mental effects. It’s as enjoyable for a quiet night in as it is out with some friends.