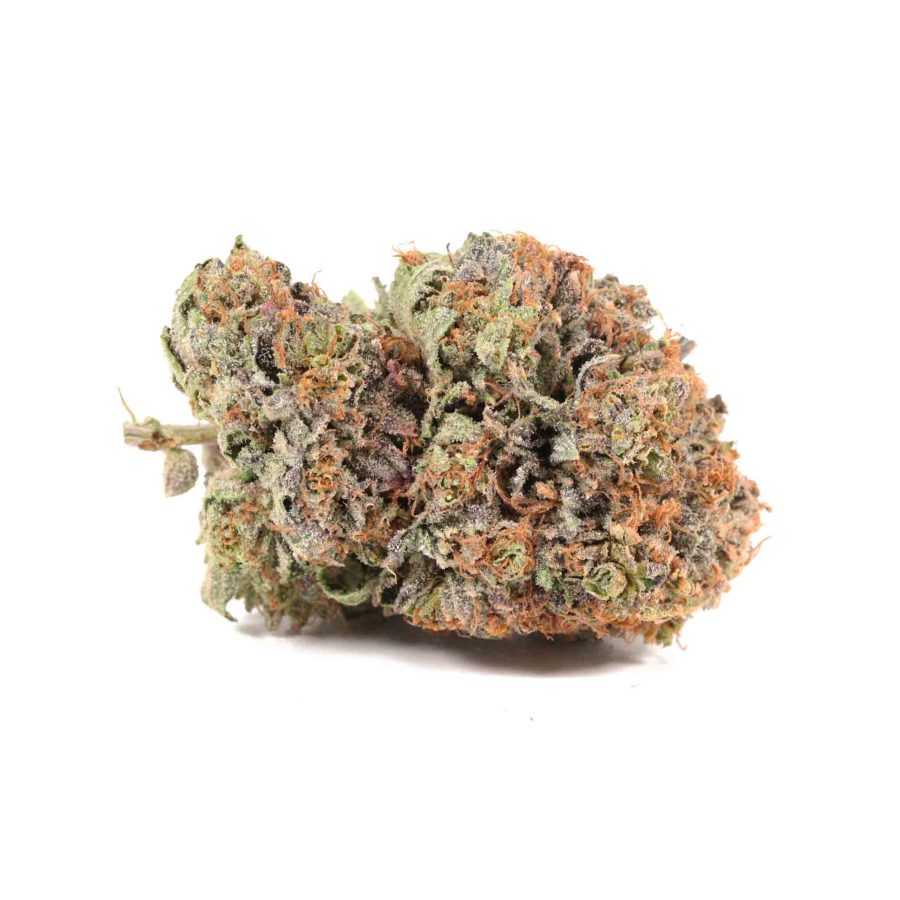 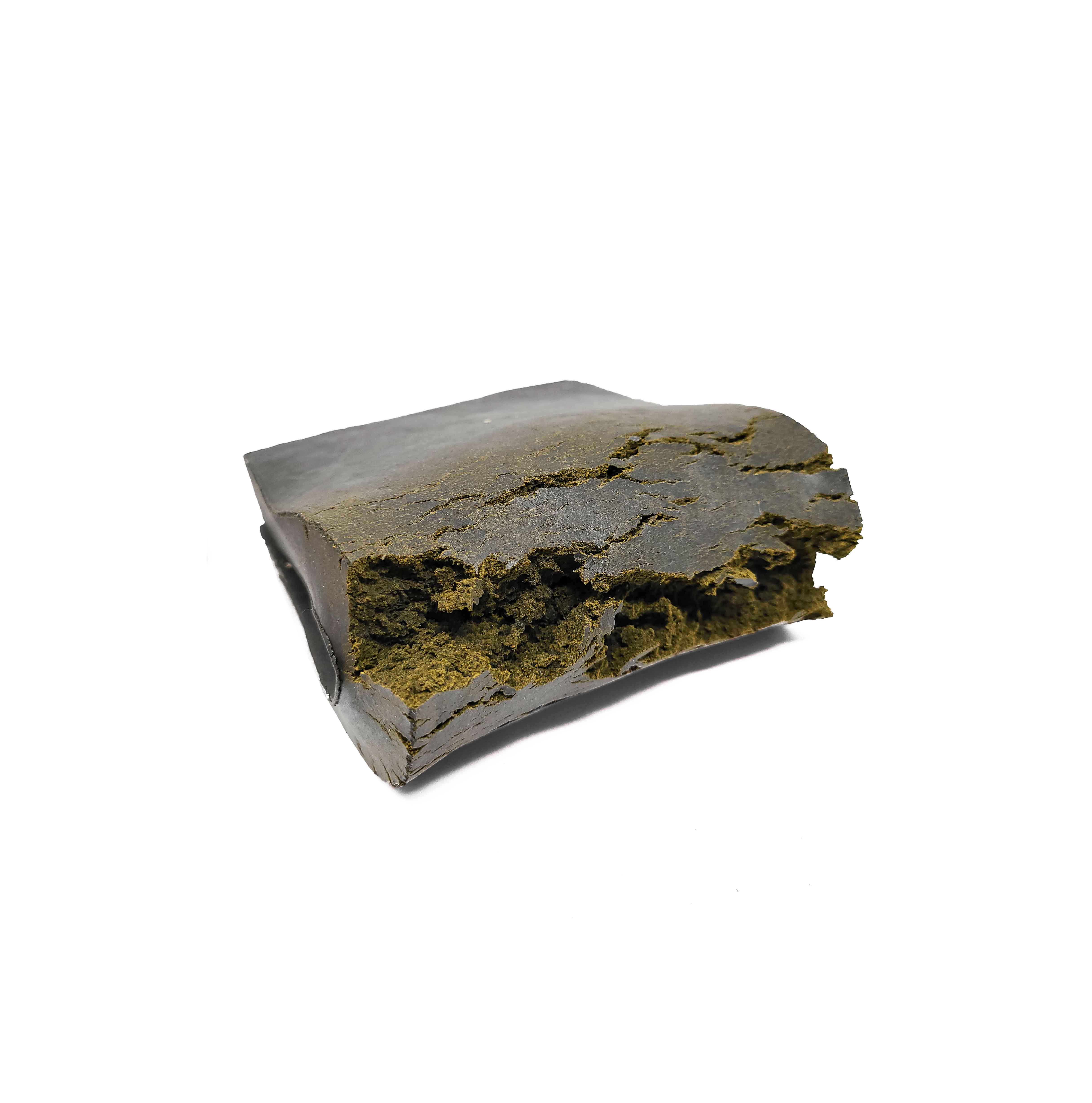 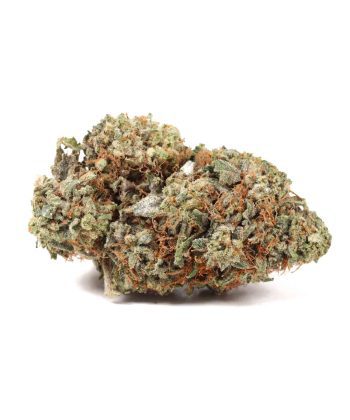 As its name suggests, Ghost Bubba From Bulk Buddy is a mysterious hybrid of uncertain origin. While its original breeders are not documented, the strain may be a cross between Bubba Kush and Ghost OG. Its high leans toward the indica end of the spectrum and the flowers give off a dank, citrus-accented smoke. Ghost Bubba’s THC content has been measured at between 19% and 25%.

Ghost Bubba’s flowers are disappointingly small, clinging together in dense, popcorn-like clusters. The buds maintain a characteristically indica structure, with small leaves that curl tightly inward toward their central stems. The leaves themselves are vibrant spring green, although certain phenotypes of Ghost Bubba also boast shades of purple, ranging from lavender to deep indigo — these surprising hues come about thanks to pigments in the strain’s genetics called anthocyanins. Finally, cloudy white trichomes make these flowers sticky to the touch.

Ghost Bubba’s flower from Bulk Buddy has a mostly woodsy, gassy & earthy aroma, with some hints of pine. A second whiff reveals some citrus tang with sweet overtones. Grinding up the dense buds, on the other hand, yields the odour of hash and spice, passed on from the strain’s Kush background. When combusted in a pipe or a joint, Ghost Bubba gives off a smooth easily palatable smoke. This smoke has an herbal citrus flavour on the exhale, almost like tea.

Ghost Bubba may take some time — as much as 10 to 15 minutes — before its high settles in. Eventually, the buds boost blood pressure in the face and head, resulting in some slight twitching in the temples as well as possible flushing in the cheeks. As these senses abate, smokers may become aware of some changes to their perception. Bright lights or loud sounds may seem more intense and dynamic, while trippy phenomena like a flattening of visual depth perception are also possible. These psychedelic properties help to set the overall tone for Ghost Bubba’s high; indeed, the strain offers little mental stimulation outside of these sensory effects and tends to induce a dreamy mindset. As such, Ghost Bubba may not be the best bud to enjoy before embarking on a detailed, demanding task. This spacey vibe can be enhanced with some atmospheric music or a visually engaging movie. As time passes or as the dosage is increased, the strain’s physical properties begin to emerge, relaxing tense muscles and weighing down limbs and eyelids in equal measure. Smokers who may have been active or on their feet may find themselves wanting to take a load off on the closest couch. At this point, Ghost Bubba is best suited to lazy endeavours like snacking or binge-watching. It can be an especially fun way to pass the time with a small ground of like-minded friends, where the strain’s laidback energy can facilitate giggles and conversation. Because of its mostly sleepy properties, Ghost Bubba is recommended for toking between late afternoon and evening when it can be fully appreciated.

Ghost Bubba can also have several applications for medical cannabis patients. Its relaxing properties can help quell the troubling symptoms of stress, depression, and anxiety. It may also take the edge off of physical aches and pains, both temporary and chronic. Anti-inflammatory properties, meanwhile, may take care of everyday irritations like cramps and nausea. Ghost Bubba’s tendency to induce munchies also makes it a good appetite stimulant for those struggling with hunger. Because it is not likely to bring about intense, cerebral states of mind, this bud is a good option for patients who are prone to panic or who have a low THC tolerance.

Seeds of Ghost Bubba are not available for sale online. Instead, home growers should obtain clippings from mature, healthy plants in order to foster genetically identical clones. It can be cultivated indoors or out, although outdoor success calls for a semi-humid climate with daytime temperatures between 70 and 80 degrees Fahrenheit. Plants tend to grow short and bushy and may call for occasional trimming away of their broad fan leaves. Growers looking to bring out the leaves’ eye-catching purple hues should expose their crops to nighttime temperatures at least 10 degrees below average, just before flowering begins. Ghost Bubba tends to flower within 8 to 9 weeks.

Ghost Bubba is one strain best saved for a luxurious evening smoke — or at least for a lazy day off. Its pleasantly fruity flavour is the icing on this physically relaxing cake.