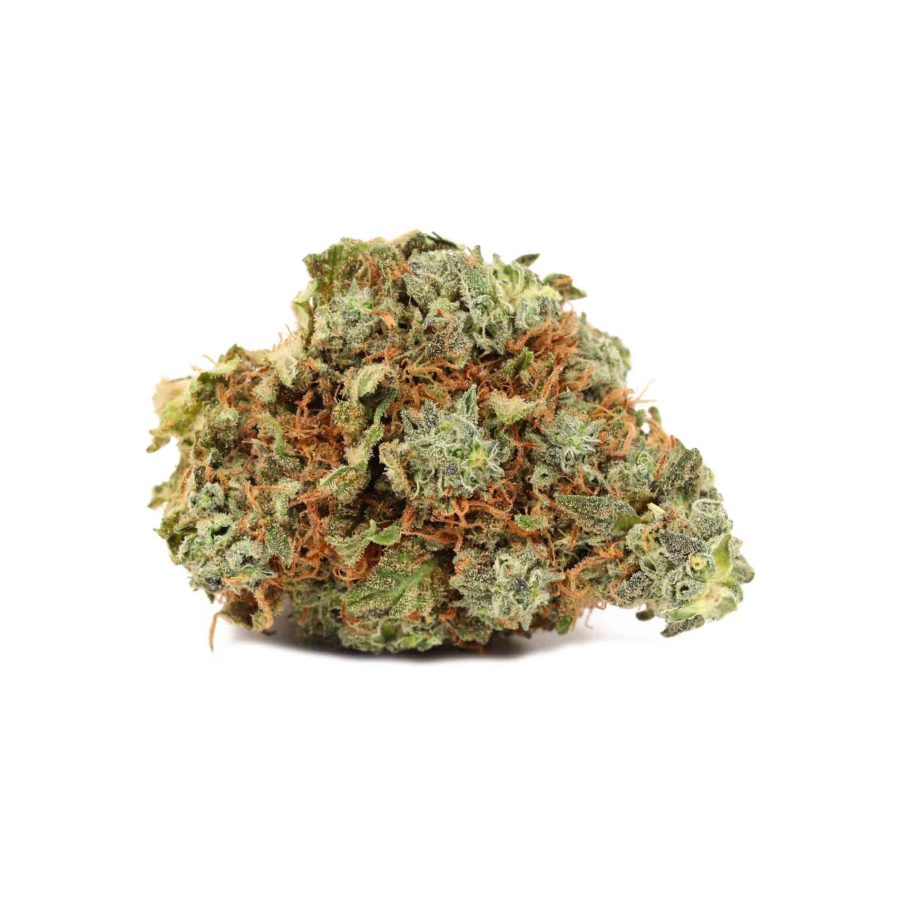 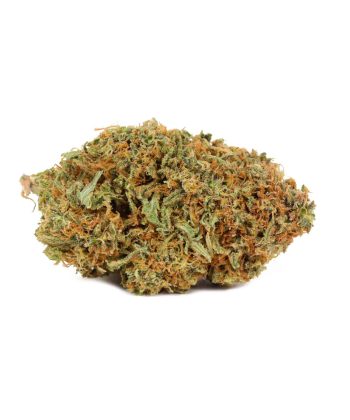 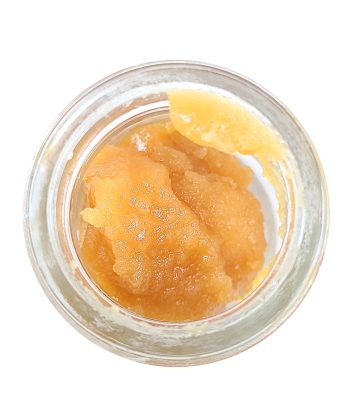 King Kong available at Bulk Buddy is an indica-dominant hybrid with the sedative force to bring down even the legendary, skyscraper-climbing beast himself. It’s a cross between the infamous Chronic and the specialty, landrace-derived strain Ed Rosenthal Super Bud. King Kong was created by Spanish breeder Dr. Underground, who has also crafted boutique strains like Painkiller and Brooklyn Mango — the latter of which also has Ed Rosenthal Super Bud as a parent. King Kong’s potency has been measured at between 18% and 24% THC.

King Kong from Bulk Buddy impresses with large flowers that adhere in a distinct cone shape. These nuggets hold the dense and solid structure that you’d expect to see in a predominantly indica varietal. Most notable about these flowers is their colour contrast: the leaves are a dark shade of forest green, while the hairy pistils stand out in bright orange. Cloudy white trichomes dot the already-colourful buds, accounting for their psychoactivity and giving them a very sticky texture.

When properly cured, King Kong has a dank, earthy odour with unmistakable highlights of skunk. Hanging out underneath is a fruity tang that keeps the strain from smelling too acrid. Meanwhile, grinding up or breaking open the flowers reveals a surprising floral scent. When combusted, King Kong burns with a smooth and palatable smoke that tastes sweet and sour on the exhale. Those enjoying this strain in public should take precautions, as it can be a particularly pungent and indiscreet smoke.

King Kong hits relatively quickly for an indica. Before the strain’s skunky taste has left their mouths, users feel a weightiness in their limbs and eyelids. Rather than mounting progressively over time, the body high sets in quickly. Mental effects arrive in the form of sensory enhancement — smokers may notice that external stimuli take on new dimensions and seem more interesting than they ordinarily might. Visual and auditory distortions are commonly reported. In the right set and setting, this psychedelic tone can inspire creativity and introspection. While King Kong doesn’t knock its users out with full-on couchlock, over time, it eases all tension that may be held in the body. The subsequent state of anxiety-free relaxation can be pointed in whatever direction the user prefers — be it productivity or contended laziness. In high enough doses, however, King Kong can lead to intractable couchlock and sleep. Because of its sedative tendencies, this bud is best suited to evening and nighttime use. Its effects are said to last longer than average, even for experienced cannabis users.

King Kong can also have several uses for medical cannabis patients. Its deep and thorough physical relaxation is an efficient analgesic for aches and pains, whether they’re temporary, as due to injury, or chronic, as due to conditions like fibromyalgia or arthritis. The strain’s anti-inflammatory properties may relieve more common annoyances like headaches or indigestion. As noted, King Kong may lull even insomniacs into a fulfilling sleep. Psychologically speaking, King Kong may temporarily take the edge off of the symptoms of stress, depression, and anxiety. Because it does not often lead to the kind of intense, recursive thinking patterns associated with paranoia, King Kong is a good choice for patients who are prone to panic or who have a low tolerance for THC.

Dr. Underground has made seeds of King Kong available for sale online. It can be grown indoors or outdoors; while outdoor cultivation typically requires a semi-humid, Mediterranean-like climate, the strong landrace genes in parent strain Ed Rosenthal’s background may make King Kong a hardier and more resilient grow than many others. King Kong flowers within 7 to 8 weeks when grown indoors and is ready for outdoor harvest between late September and early October. It offers conscientious growers a high yield of bud for their efforts. Finally, just as this strain is a pungent smoke, it can be a very pungent grow; those looking to keep their indoor grow rooms under the radar should invest in odour-control measures like carbon air filters.

Pair this powerful indica with fellow indica hybrid Godzilla for a true battle of the fictional titans — one that’ll likely result in you glued to your couch for much of the immediate future.