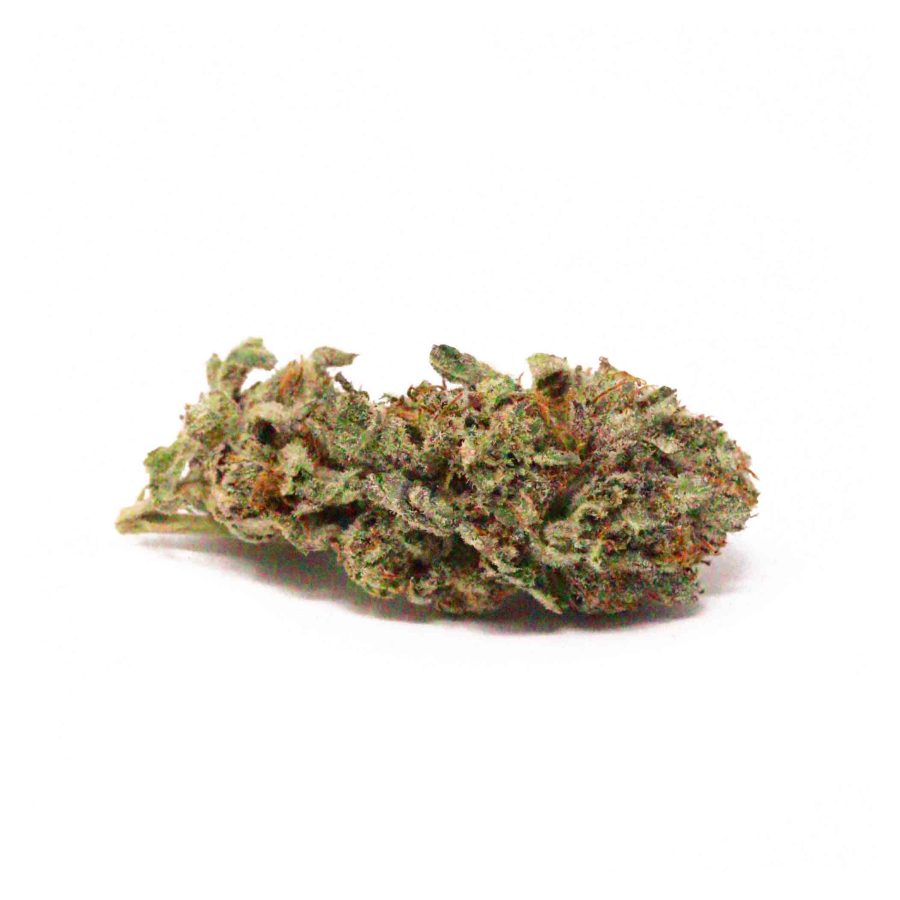 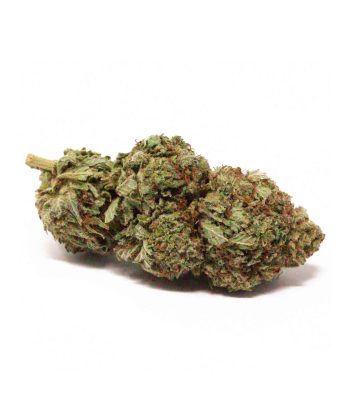 Cherry Kush from Bulk Buddy is a flavour-focused, indica-dominant strain that’s well-suited to nighttime relaxation. This strain was born from staple hybrid OG Kush and a purple-flowering phenotype of the indica landrace Afghani. In addition to a bold, fruity flavour, it is known for its well-balanced effects. Its THC content has been measured at between 18% and 25%.

Bulk Buddy’s Cherry Kush sets itself apart with medium to large-sized flowers that hold an elongated, tapered formation, somewhat like miniature pinecones. These buds are true to their indica lineage, with leaves curling tightly inward in a characteristically dense and solid structure. The leaves themselves are a vivid mossy green although frequently, phenotypes of the strain show flashes of purple thanks to a high concentration of the pigment anthocyanin. Finally, these flowers are twisted through with hairy orange and red pistils and are capped off with translucent white trichomes.

The first whiff of Cherry Kush’s cured flowers reveals some sour-sweet notes, somewhat like fermented vegetable matter. Hanging out underneath is a more sweet, berry-like aroma. Grinding, meanwhile, releases a spicy, hashy odour that brings to mind parent strain OG Kush. When burnt in a pipe or a joint, Cherry Kush gives off a pleasantly smooth smoke that goes does easy. This smoke tastes of berry with some traces of skunk on the exhale.

Cherry Kush’s high is a bit of a creeper and may take some time before it fully reveals itself. About 10 to 15 minutes after consumption, though, this strain begins to exert head-focused effects, including possibly flushing in the cheeks or increased salivation. Once users begin to acclimate to these odd sensations, they can open themselves up to Cherry Kush’s waves of cerebral stimulation. Certain ideas and concepts may hold more weight than they ordinarily might and may flow from one to the next in surprising new associations. This kind of trend-in mindset makes Cherry Kush’s onset a good time for working on complicated, solution-oriented tasks, as well as mundane activities cleaning the house. Many smokers also describe some odd changes to sensory perception in this strain’s early effects, including a warping of their field of visual depth and some uncanny feelings of time dilation. These trippy properties can be pushed even further with atmospheric enhancements like moody music. In fact, after an hour or so, kicking back with a relaxing playlist may be all you want to do, as Cherry Kush’s body high begins to take over. Any previously active consumers may find themselves relaxed, with a newfound weightiness in their eyelids and limbs. While more or less mentally lucid, smokers at this stage may be less likely to have the motivation to get out the door to run through a busy agenda. Instead, enjoy this bud’s later effects as you kick back for a binge-watching session or a snack with some like-minded friends. Because it gradually descends from stimulation into lazy relaxation, Cherry Kush is recommended for consumption between late afternoon and early evening.

Cherry Kush’s versatile effects give it a few applications for medical cannabis patients as well. Its tuned-in mental energy can help those with attention deficit disorders to stay focused on a single task. The strain’s upbeat mood can also temporarily soothe the symptoms of mild to moderate stress, depression, and anxiety. It may even relieve physical pain, whether it’s temporary, as due to injury, or chronic, as due to conditions like arthritis or fibromyalgia. Because its initially cerebral effects may prove overwhelming in the wrong set and setting, patients who are prone to panic or paranoia should consume this strain with some caution and moderation.

Seeds of Cherry Kush are available for sale online, but potential buyers should always exercise caution and investigate the reliability of digital seed vendors. Alternatively, home growers may obtain clippings of mature plants of the strain to foster genetically identical “clones.” Cherry Kush can be grown indoors or out, although success outdoors calls for a humid climate with daytime temperatures between 70 and 80 degrees Fahrenheit. Plants tend to grow short and bushy and may require occasional pruning. Growers looking to bring out the flowers’ purple hues should expose their crops to nighttime temperatures between 10 and 15 degrees below average, just before flowering begins. Cherry Kush flowers within 8 to 9 weeks when grown indoors.