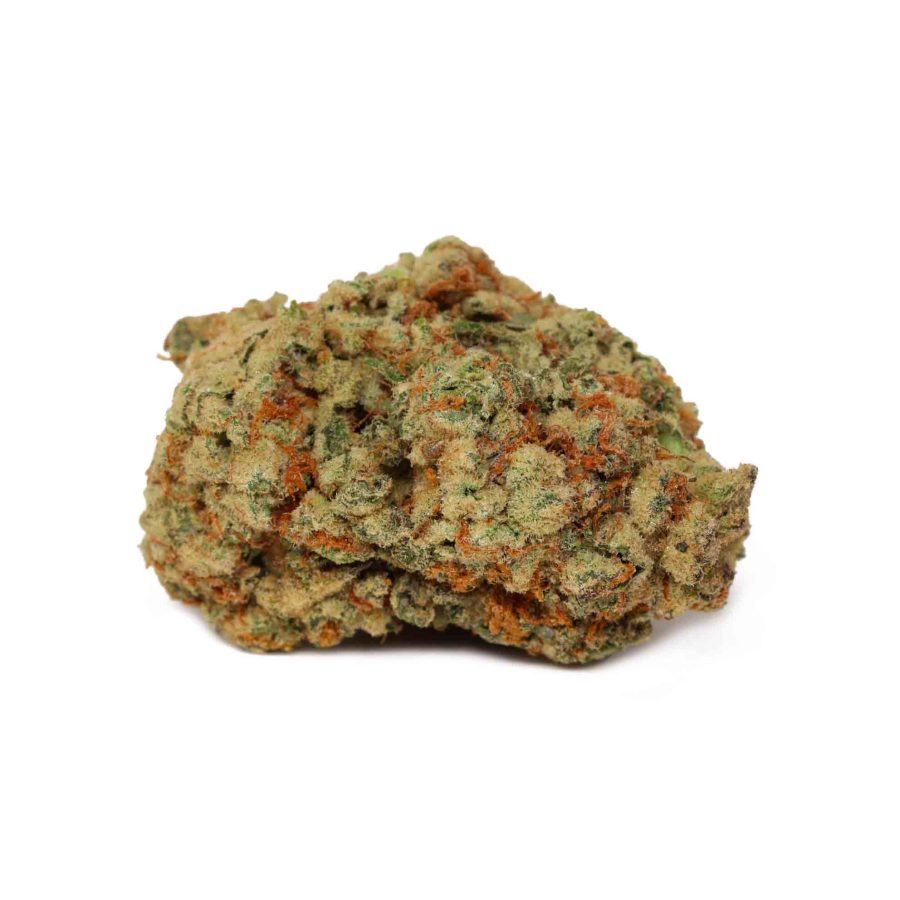 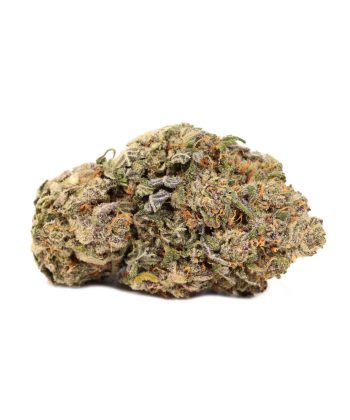 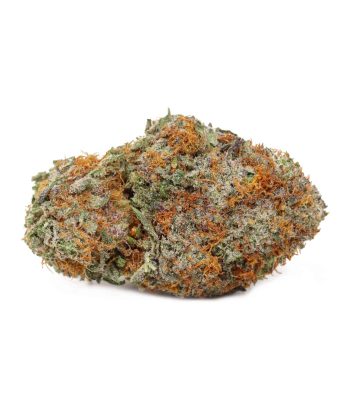 With a soaring cerebral high and a deep physical body stone, Ice Wreck’s dramatic name serves as an accurate description of its potent effects. This memorable strain is a combination of resinous Ice and landrace-descended Trainwreck. Created by Crop King Seeds, the prolific breeders of strains like Candy Cane and Crown Royale, Ice Wreck offers a rich, earthy aroma alongside a simultaneously focused and luxuriously relaxing high. This bud’s THC content has been measured at between 18% and 28%.

Ice Wreck is marked by small to medium flowers that do little to visually convey the strain’s power. These buds cling together in dense, clustered formations and hold roughly spherical shapes. They have a dense, solid structure associated with indica varieties. Leaves are a dark shade of olive green and are twisted through with vibrant orange hairs (which are pistils, botanical structures meant to catch pollen from fertilizing male plants). Finally, true to its name, Ice Wreck is covered in a thick, even blanket of translucent white trichomes, making these flowers very sticky and giving them an icy appearance even when viewed from afar.

When properly cured, Ice Wreck’s flowers give off a fresh, woodsy pine scent. On closer inspection, there are also some dank notes of damp earthy. Meanwhile, grinding up or breaking open the small buds gives off a rich perfume of incense and spice, perhaps testifying to the Afghani indica in this strain’s lineage. When burnt in a pipe or a joint, Ice Wreck gives off a harsh, acrid smoke that may tickle the smoker’s palate and lungs, inducing tears and coughing. On the exhale, this rough smoke carries a piney, peppery flavour.

Ice Wreck’s high takes effect quickly, exerting pressure around the smoker’s eyes and temples scarcely before they’ve finished coughing. What follows is a suddenly cerebral mindset that can be good for the kind of freely associative thinking that lends itself to both task-based analytical work as well as more freewheeling, creative brainstorming. Ice Wreck also brings buzzy energy that’s great for accomplishing an afternoon’s worth of errands or a similarly mundane activity like cleaning. The strain’s strong cerebral nature, forcing smokers to spend time in their heads, can be disorienting for the uninitiated. In the right set and setting, though, this energy can be uniquely lucid and even social, provoking conversation and good vibes when shared with like-minded friends.

As the high progress, a progressive body stone sets in, pulverizing any pervasive muscular tension while allowing users to breathe more deeply and easily. This mellow indica onset can take the edge off of the strain’s initially cerebral properties, allowing smokers to kick back and chill out. Ice Wreck is unlikely to become incapacitating, though. Instead, its eventual blend of mental and physical stimulation can be a great way to enhance activities that involve both brain and body coordination, like exercise, video games, and even sex. Because of its decrescendo down from energy into subtle relaxation, Ice Wreck is recommended for late afternoon to early evening use.

This bud’s versatile effects can have wide-ranging applications for medical cannabis patients. Its upbeat, energetic properties may temporarily relieve the troubling symptoms of mild to moderate stress and depression. Its lasting sense of focus can also be a boon to those with attention deficit disorders. Meanwhile, Ice Wreck’s physically relaxing properties may soothe aches and pains, whether they’re temporary, due to injury, or chronic, due to conditions like lupus or fibromyalgia. Because its early effects can be mentally fast-paced and disorienting, this strain is not a good option for patients who are prone to panic or who have a low tolerance for THC.

Fortunately for home growers, seeds of Ice Wreck are available for sale online. Considered moderately difficult to grow, it can be successfully cultivated indoors or outdoors in a semi-humid, Mediterranean-like climate. Ice Wreck’s Sativa genetics are apparent in its long, 10-week flowering time. When mature, it offers a low to an average yield of flowers.

Ice Wreck’s balance makes it a good all-purpose smoke for experienced consumers with a baseline THC tolerance. The strain’s high trichome count may also be useful in the production of hash and other THC concentrates.