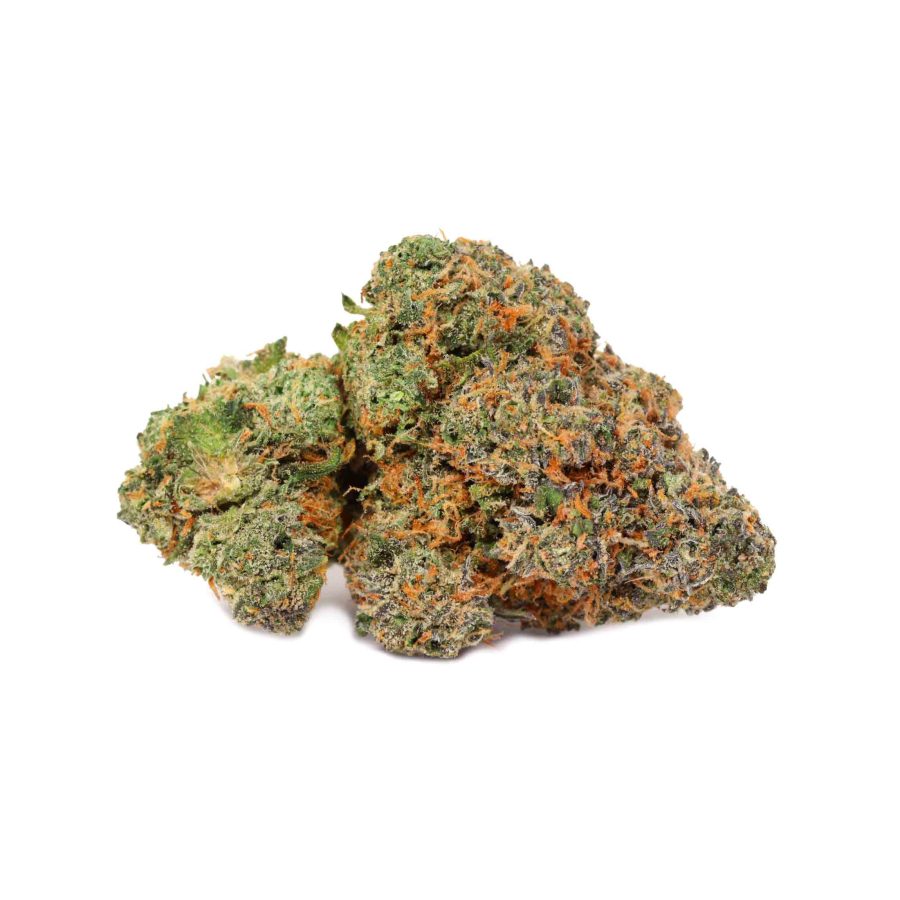 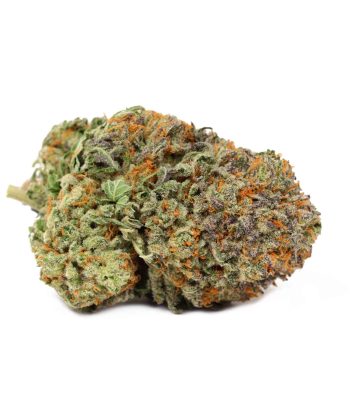 Sour Tangie is a Sativa-dominant hybrid with two well-known parents. Created by prolific cannabis breeders DNA Genetics, it is a cross between East Coast Sour Diesel and cult favourite Tangie. In addition to mentally focused effects, the strain offers a bold citrus flavour profile. Sour Tangie’s THC content has been measured at between 15% and an insane 30%.

Sour Tangie establishes its appeal right away with larger-than-average buds that range in shape, depending on the phenotype, from long and cylindrical to short and tapered. They have a characteristically loose and fluffy sativa structure, with long, wispy leaves. These leaves are a patchwork of dark and bright green and are threaded through with neon orange pistils. Cloudy white trichomes finish off these impressive flowers, making them very sticky to the touch and difficult to break apart without a grinder.

The first inspection of flowers of Sour Tangie may pick up on some fruity, citrus notes. A second whiff, meanwhile, might detect a strong diesel aroma, picked up from parent strain ECSD. Grinding up or picking apart these leafy buds can release more of a hashy, sandalwood-like odour. When Sour Tangie is combusted, it burns with a smoke that is, unsurprisingly, sour, but also smooth and easy on the lungs. On the exhale, this aromatic smoke leaves behind a spicy, orange-tinged flavour.

Like other, mostly Sativa strains, Sour Tangie’s high takes hold relatively quickly. Initial signs of the strain’s action include a head rush that comes with an increased pulse around the temples and some possible flushing in the cheeks. Within minutes, these odd sensations die down, and consumers are immersed in an elevated mindset, marked by an increased intensity of thought. Thoughts may jump from one to another in a free association, while certain concepts or objects may seem to take on a new significance. This cerebral state can spell productivity under the right circumstances — motivated smokers may be able to work for an extended period on complicated analytical tasks as well as on more open-ended, creative projects. For those who aren’t feeling as productive, Sour Tangie’s activated buzz can just be a fun way to pass the time daydreaming as you’re working on mundane errands or household chores.

Even after an hour or so, Sour Tangie’s mental stimulation stays consistent. Although some users describe an increase in physical relaxation, this body stone isn’t usually strong enough to lock them on the couch. Instead, those who are so inclined can enjoy Sour Tangie’s subtle combination of mental and physical activation with activities that involve complex coordination, including, but not limited to, dancing, exercise, and even sex. The strain can also be an effective social lubricant in party settings, sparking camaraderie and free-flowing conversation. Because of its mostly wide-awake vibes, Sour Tangie is recommended for daytime (and even wake-and-bake) consumption.

Sour Tangie’s buzzy effects may also be of use to medical cannabis consumers. Its long-lasting thoughtfulness may aid focus for those with attention deficit disorders. Its generally elevated mood can also temporarily improve the symptoms of stress and depression. Physical benefits, while subtle, include relief from chronic aches and pains, as well as from inflammation-related discomforts like cramps and headaches. The strain’s ability to induce the munchies may even serve as an appetite enhancement for those dealing with diminished hunger due to disease or treatments like chemotherapy. Because its thought patterns can lean towards the paranoid and the obsessive in the wrong set and setting, Sour Tangie is not recommended for patients who are prone to panic or who are inexperienced with THC.

Luckily for home gardeners, DNA Genetics has made seeds of Sour Tangie available for sale online. Once obtained, the strain can be grown indoors or out, although outdoor growth depends on hot and semi-humid with consistent daytime sunlight. Due to their Sativa genetics, these plants can grow quite tall and may require indoor gardeners to keep their height manageable with occasional pruning. Sour Tangie flowers within a long 9 to 10 weeks, but reward patient gardeners with a fairly high yield, estimated at between 46 to 56 grams (or 1.6 to 2 ounces) of flower per square foot of plant.

A winner for fans of both citrus and diesel aromas, Sour Tangie is an excellent all-purpose Sativa. Its tuned-in energy can be especially fun during a hike through the great outdoors.