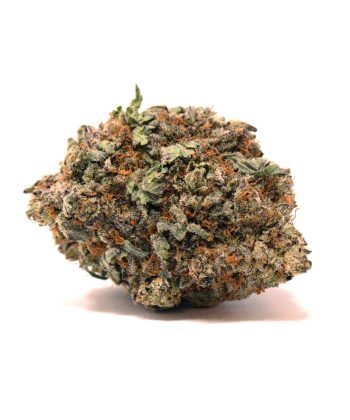 Not to be confused with popular indica Big Bud, BC Big Bud is actually descended from that strain. BC Big Bud is the creation of British Columbia-based growers Jordan of the Islands and riffs on the indica genetics of Big Bud by crossing it with an unspecified sativa. The result is a fruity strain that offers an excellent balance of head and body effects. Like Big Bud, BC Big Bud is also known for exceptionally large flowers and a high yield come harvest time. This strain’s THC levels clock in at between 12% and 21%.

True to its name, BC Big Bud produces huge, chunky flowers. These buds typically have a spherical shape, slightly smaller than a golf ball, and are densely packed, with their small leaves curling tightly inward toward their central stems. These overlapping leaves themselves are a dark mossy green and are shot through with curly orange and brown pistils. Translucent white trichomes cap off these already-colourful flowers, giving them a white sheen and making them very sticky and difficult to break up by hand.

The most apparent aroma of BC Big Bud’s flowers is the musky, pungent scent of skunk. Lurking underneath is a more dank, earthy odour, reminiscent of damp soil. Grinding up these large nuggets gives off a rich, spicy scent, possibly passed on from Afghani. When burnt, BC Big Bud gives off a smoke that can be harsh and acrid, stinging the palate and making eyes water. Nevertheless, this smoke carries a pleasantly sweet and piney taste on the exhale.

BC Big Bud’s effects assert themselves relatively quickly, beginning with a concerted pressure around the eyes and forehead shortly after consumption. Some smokers may also detect a flush in the face or an increase in salivation. These odd sensations are met with an uptick in cerebral patterns of thinking. In particular, users may tend to dwell on ideas or concepts that might not otherwise hold a fascination for them. Some may also be struck by freely associative energy that causes them to jump around from one topic to the next. This mindset can be effective for executing tasks, whether they’re complicated and work-related or more basic and mundane, like doing the dishes. As time passes or as the dosage is increased, BC Big Bud’s indica side begins to assert itself, with progressive feelings of relaxation rolling down the neck and taking hold in the core and limbs. While not laid out flat by the bud’s relaxing properties, smokers may be more likely to kick back on the closest comfortable couch, or at least to feel a general relief of tension and stress. At this point, BC Big Bud’s combination of mental and physical relaxation can be an ideal way to savour activities that require both brain and body coordination, including exercising, gaming, and sex. BC Big Bud’s elevated but soothing energy can also be a good way to enhance buzzy social situations, inspiring free and easy conversation and good vibes among like-minded friends. This strain’s versatility makes it appropriate for enjoyment throughout the day, although consumers should avoid it just before bed when the sativa onset is liable to keep them wide awake.

BC Big Bud can also have several applications for medical cannabis patients. It can aid focus for those with attention deficit disorders, helping them to concentrate on a single task. The strain may also temporarily improve the harsh symptoms of mild to moderate stress and depression. Physiologically speaking, BC Big Bud can also relieve pain that’s due to injury, chronic conditions like lupus, or simple irritations like headaches and indigestion. Because its early effects may bring about some intense, recursive patterns of thinking, this strain is not recommended for patients who are prone to panic and paranoia or who have a low tolerance for THC.

Seeds of BC Big Bud are available from several online retailers. Once obtained, it can be grown indoors or out, although successful outdoor cultivation calls for a semi-humid climate with daytime temperatures between 70 and 80 degrees Fahrenheit. Whichever environment they choose, growers should note that BC Big Bud can be particularly sensitive to excessive moisture. Plants tend to grow short and bushy with strong lateral branching. This strain flowers within a short 7 to 8 weeks indoors and are ready for harvest in early October outdoors. As flowering begins, growers should take care to tie their crops’ branches to supports like wooden dowels to keep them from sagging under the weight of these huge buds.

BC Big Bud is a welcome enhancement to both solo and social settings. When shared with friends, its large and eye-catching buds can be a fun conversation starter, from grinding to smoking.

13 reviews for BC Big Bud