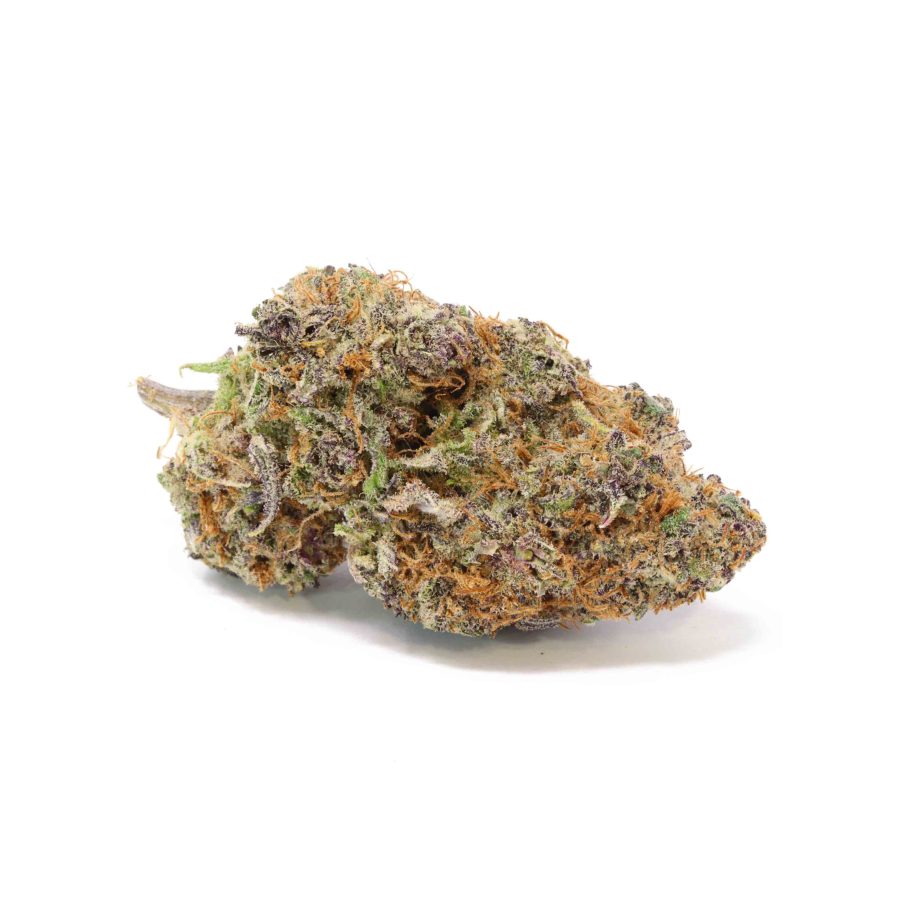 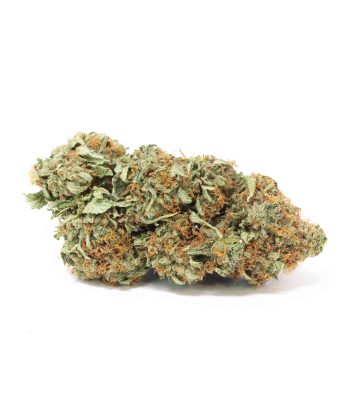 Black Ice is typically a dangerous phenomenon to watch out for when walking or driving — but the cannabis strain Black Ice offers no such nasty surprises. Black Ice is a primarily indica hybrid created by Spanish producers The Moon Seeds. It is a cross between Black Domina and the notorious White Widow and has a dank, earthy aroma alongside a heavy sedative high. This strain’s potency has been measured at between 19% and 24% THC.

Black Ice is marked by small to medium-sized nuggets of densely packed leaves. The leaves themselves are a mossy green and are threaded through with vibrant orange hairs (which are actually pistils, structures meant to catch pollen from fertilizing male plants). Frequently, phenotypes of this strain also have patches of dark purple in their leaves; these hues come about when anthocyanin pigments in the plant’s genetics are stimulated by colder than average temperatures during the growing process. Finally, Black Ice has a thick coating of white trichomes that rivals even the resin production of parent strain White Widow. These trichomes make the buds super-sticky to the touch and give them a slight white sheen, perhaps inspiring the “ice” in this strain’s name.

The smell of sour-sweet, overripe berries wafts up from cured buds of Black Ice. The flowers also have some musky, earthy undertones that keep their aroma from being overly sweet and tangy. Grinding or breaking up the leaves yields some notes of black pepper and incense, likely the influence of Afghani in the strain’s genetics. When combusted, Black Ice burns with a very smooth, rich smoke that has a dank acrid, taste on the exhale. A slight floral aftertaste may also be evident.

Black Ice offers what can be described as a creeper of a high, sometimes taking several minutes before its effects can be detected. A tingle in the upper face and extremities may be barely perceptible at first, becoming louder and louder until smokers’ faces morph into permanent smiles. Users may also feel any muscular tension dissipate as breathing happens more slowly and deeply.

Black Ice’s high mostly impacts the body, only affecting the mind insofar as it slows down thoughts, putting users into a dopey and dreamy state of mind. The strain is a great accompaniment to passive activities like binge-watching or listening to some trippy, immersive music. As this sedative high wears on or as the dosage are increased, smokers may feel themselves slowly and pleasantly melting into their surroundings. It way goes without saying, then, that Black Ice is best enjoyed at night. Finally, many users describe this strain high as relatively short, at less than 2 hours.

Medical cannabis users can also find value in Black Ice’s relaxing effects. It can be an effective way to temporarily numb the distracting symptoms of stress and depression. It can also soothe aches and pains of all kinds. Meanwhile, anti-inflammatory properties may counteract everyday discomforts like headaches and indigestion. As noted, Black Ice can also relax its users to the point of immobility, making it a potential treatment for insomnia. Because of its relative lack of intense, cerebral effects, this may also be a good choice for patients who are prone to panic or who have a low THC tolerance.

Humid The Moon has made seeds of Black Ice available for sale online. It can be grown indoors or out; while outdoor cultivation typically requires humid climates with daytime temperatures between 72 and 80 degrees Fahrenheit, the stable Northern Lights and Afghani genes in this strain’s lineage may make it more resistant to adverse outdoor conditions like temperature variations. Plants of Black Ice have a characteristically indica silhouette, with short and bushy stature and strong lateral branches. Growers looking to bring out the strain’s eye-catching purple hues should expose the plants to cold (but not freezing) nighttime temperatures. Black Ice flowers within 8 to 9 weeks when grown indoors and is ready for harvest in late September when grown outdoors.

Although it’s not the best strain to savour if you have a busy day ahead of you, Black Ice works perfectly as a fruity treat at the end of the day. Its sky-high resin production also makes this a good strain for making hash and other THC concentrates.