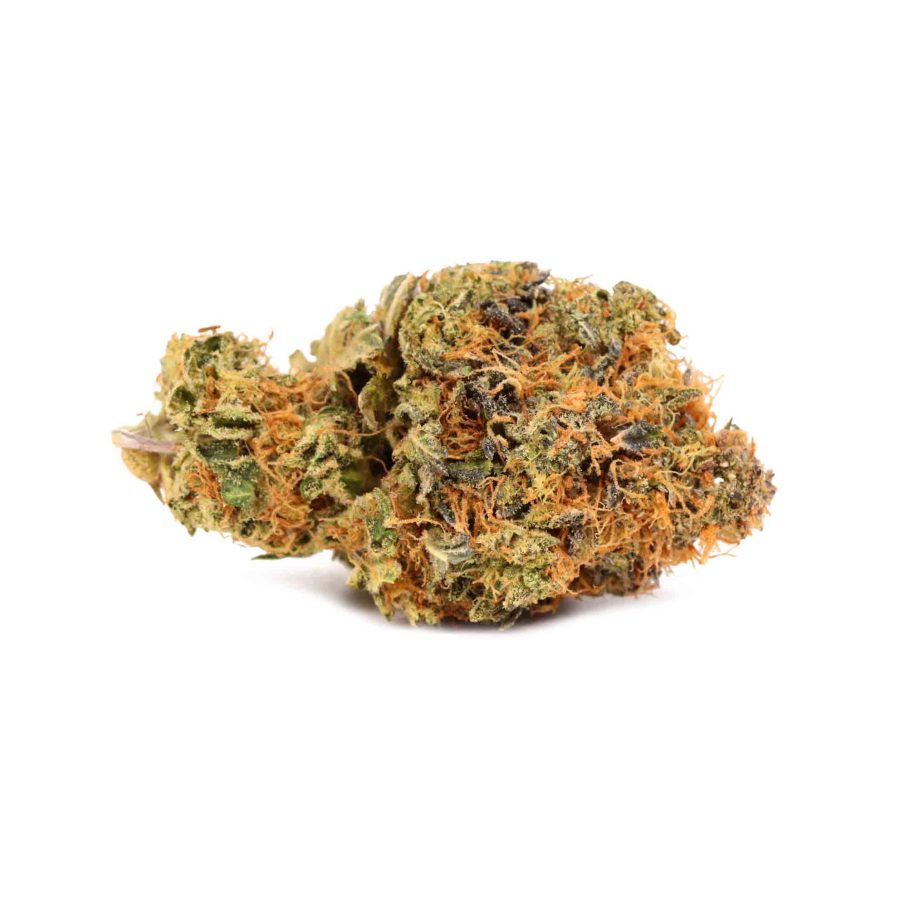 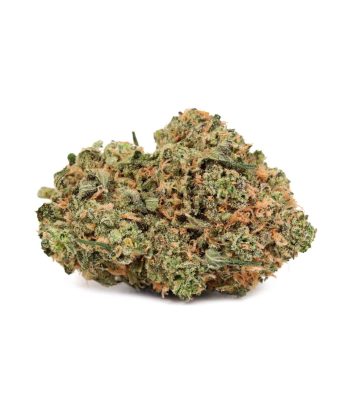 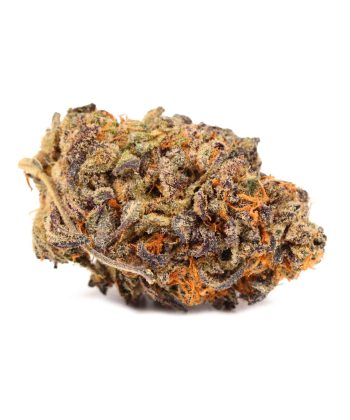 Orange Creamsicle is a sativa-dominant hybrid with balanced, subtle effects. The real highlight here is the boutique strain’s memorable flavour profile, a combination of sweet citrus and vanilla that reminds many of the classic desserts of the same name. A cross between Orange Crush and Juicy Fruit, both flavour-engineered strains themselves, Orange Creamsicle was created by MTG Seeds, breeders who supply California dispensaries with various limited edition strains. With somewhat lower than average potency, this strain may be a good choice for newcomers to cannabis; its psychoactivity has been measured at between 7% and 18% THC.

Orange Creamsicle stands out with large, solid flowers that are almost cylindrical in shape, tapering slightly from base to tip. The densely-packed leaves are a mossy shade of green. Bright orange pistils stand out vibrantly against the leaves while plenty of translucent white trichomes give the flowers a silvery sheen. This coexistence of orange pistils and white trichomes within these buds seems to suggest that the flowers’ colour scheme is more of a reason for this strain’s name than its actual flavour.

Properly cured, the flowers of Orange Creamsicle emit a sharp citrus tang. Hanging out underneath is a fruity berry scent, possibly passed on from grandparent strain Blueberry. These flowers have a relative lack of dank or spicy odours, even when ground up or broken open. When burnt in a joint or a pipe, Orange Creamsicle gives off a smooth and easy smoke. There’s an undeniable aftertaste of orange on the exhale; some smokers also report hints of vanilla hanging out on the palate.

For a sativa, Orange Creamsicle offers a relatively slow, creeping high. Several minutes after savouring this bud’s unique taste, smokers will feel a constriction of blood vessels around the eyes and temples. Eventually, smokers also notice an uptick in freely associative thought. Far from intensely cerebral, though, these mental effects are subtle. Users are typically still able to converse or to carry on with any complicated analytical or creative tasks in front of them. As the high wears on, a gradual feeling of physical relaxation creeps in, banishing muscular tension and allowing consumers to breathe more deeply and easily. This combination of mental and physical effects can take the edge off of a long day, eliminating stressors and allowing for some mellow introspective time. Relaxing but not sleepy, Orange Creamsicle rarely leads to couchlock. It is also free from the sharp, disorienting come down from the euphoria that may come with some purer sativas. Because of its versatile and even-handed effects, this bud is as enjoyable for a wake-and-bake as it is for a nighttime treat.

Orange Creamsicle is a sativa-dominant strain that’s a lot like the iced dessert that it’s named after. It’s creamy and has a melt-in-your-mouth effect that leaves many users savouring the delicious aftertaste it leaves.

But this strain is about so much more than just the mouth-watering flavour. Sativa strains are known for their “head high” – energizing and uplifting effects that can help reduce stress or anxiety and increase focus and creativity. This makes sativas perfect for days when we feel like we are taking on more than we can handle, helping users to achieve what they once felt was impossible.

Whereas indicas tend to have more sedative effects that give users a body high, sativa strains usually cause more cerebral effects, making them perfect for daytime use. The effects are invigorating, helping users to feel more alert and capable of taking on physical activity or creative tasks.

This strain is fast-acting and delivers a rush of euphoria to the user’s brain immediately after a few puffs. However, at first, it’s subtle and gradually intensifies. The sensation is best described as being cradled in the clouds as you drift off to new heights.

You will often see Orange Creamsicle users with big smiles on their faces. After all, the initial onset inspires a deep sense of happiness from within. Some might even feel ecstatic as moods enhance and worries melt away.

A few minutes after smoking, users will feel a constriction of blood vessels around the temples and eyes. Eventually, you will also notice a boost in freely-associated thought. However, rather than being intensely cerebral, the mental effects are subtle.

Typically, users will still be able to converse and carry on with creative or analytical tasks in front of them. As the high intensifies, you can expect a gradual feeling of physical relaxation, eliminating muscle tension and making it easier to breathe.

The combination of physical and mental effects can help to take the edge off a long and stressful day, allowing for some mellow introspective time.

Orange Creamsicle may have several benefits for medical cannabis patients as well. Its ability to regulate mood can temporarily alleviate the acute symptoms of mild to moderate stress, depression, and anxiety. The strain’s relaxing somatic effects can also soothe patients’ aches and pains, whether they’re temporary, due to injury, or chronic, as due to conditions like lupus or fibromyalgia. Additionally, anti-inflammatory properties may take care of more common irritations like headaches or nausea. Because of its lack of intense cerebral effects, Orange Creamsicle is a good option for those who may be prone to panic or who have a low tolerance for THC.

Seeds of Orange Creamsicle are sometimes available from breeder MTG, pending stock levels. Alternatively, prospective growers can obtain clippings from mature plants of the strain to grow genetically identical “clones.” This bud can be grown indoors, or outdoors in semi-humid climates with consistent daytime temperatures in the 70 to 80 degree Fahrenheit range. That said, Orange Creamsicle can be a hardy, resilient grow even in adverse conditions, thanks to the sturdy Thai and Afghani landrace genes in parent strain Juicy Fruit’s background. Like many sativas, these plants can reach great heights and, if grown indoors, will need to be trained early on in the vegetative stage through regular trimming and pruning. Also like many sativas, Orange Creamsicle has a long flowering time of about 9 weeks when cultivated indoors. It is known to offer growers a high yield of flowers for their efforts.

Orange Creamsicle’s refreshing flavour and middle-of-the-road high are as enjoyable when savoured alone as they are when shared with friends. If you do decide to share this bud, make sure you have enough, as its crowd-pleasing aroma is sure to turn some heads.