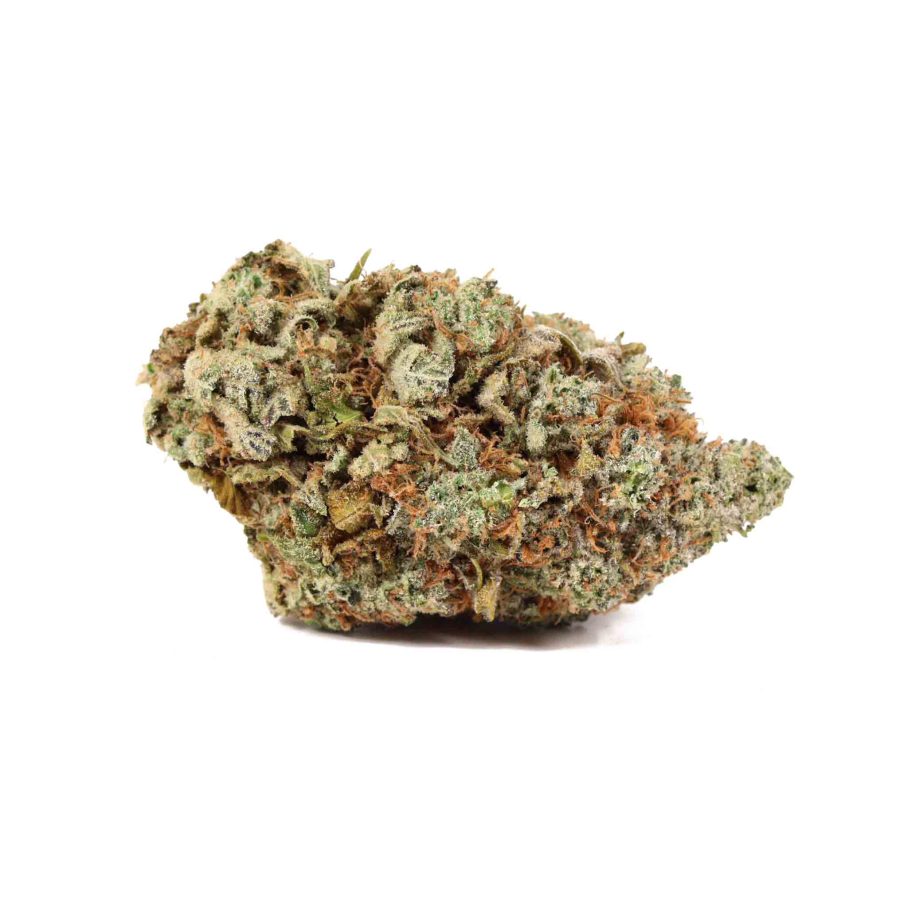 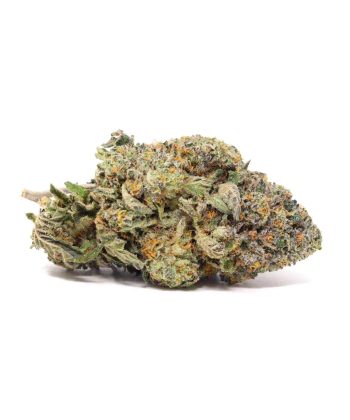 Pineapple OG is a fruity, sativa-dominant cross between two very well-known strains. The child of Pineapple Express and notorious OG Kush, this bud has a robust flavour and offers both upbeat and relaxing effects. Pineapple OG’s THC content has been measured at between 17% and 26%.

Pineapple OG stands out with surprisingly large flowers that adhere in chunky green columns. They have a distinctly indica bud structure, with small leaves that spiral inward toward their central stems. The leaves are a bright yellowish-green and are twisted through with neon orange hairs (which are actually pistils, meant to catch pollen from fertilizing male plants). Finally, these eye-catching buds have a sheen of cloudy white trichomes that make them very sticky and account for their psychoactivity.

This fruity strain isn’t just nice to look at. Its cured flowers carry a dank tropical aroma with notes of mango and citrus. A second inspection may also pick up on a sour-sweet odour, similar to that of overripe or fermenting fruit. Meanwhile, breaking these tight buds apart or grinding them up yields some diesel-like fumes. When it is burnt, Pineapple OG gives off a light and very palatable smoke. This smoke has a tangy pineapple flavour on the exhale.

The high from Pineapple OG arrives relatively quickly, giving consumers a brief head rush marked by odd sensations like the stimulation of the salivary glands or some flushing in the cheeks. Once these tics become more familiar, smokers may notice that their thoughts are moving more quickly and have taken on a new intensity. This kind of activated cerebral thinking can enable ongoing work on analytical tasks and problem-solving scenarios. It can also simply provide some background amusement for those working on boring everyday tasks or errands. Besides these cognitive effects, smokers may also experience changes in sensory perception, resulting in phenomena like visual or auditory distortions. Those who are so inclined can amplify these trippy vibes by turning on a favourite playlist or a compelling movie.

After about an hour — or sooner, if the dosage is increased — Pineapple OG’s heavy physical effects begin to emerge. A weighty, tingling sensation begins to roll down the neck and radiate out to the core and limbs. Consumers may find relief from any chronic muscular tension or may be able to take deep, restorative breaths. Even as these properties reveal themselves, the strain’s more head-focused qualities persist. As such, Pineapple OG can be a great way to enhance activities involving full-body coordination, including gaming or some moderate exercise. For those who aren’t feeling as motivated, though, this strain be a good way to unwind after work; it may also help to encourage camaraderie and natural conversation when shared in social settings. Because of its gradual descent into sedation, Pineapple OG is recommended for late afternoon or early evening consumption.

Pineapple OG’s versatile effects can also have usefulness for medical cannabis patients. The keyed-up, cerebral thinking that comes with its onset can be a concentration aid for those with attention deficit disorders. Additionally, the strain’s ability to improve move can temporarily treat the symptoms of stress and depression. On the physical end of the spectrum, Pineapple OG may soothe aches and pains, whether they’re temporary, due to injury, or chronic, as due to conditions like cancer or lupus. Anti-inflammatory properties, meanwhile, may take the edge off of irritations like nausea or cramps. Because its recursive patterns of thinking can become self-directed and paranoid in the wrong set and setting, Pineapple OG is not recommended for patients who are prone to panic.

Seeds of Pineapple OG do not appear to be available for sale online. Instead, prospective home growers should find a trusted source from which to take clippings of the strain; these can be grown as genetically identical “clones.” Pineapple OG can be successfully cultivated indoors or out, although outdoor success depends on a humid climate with daytime temperatures between 70 and 80 degrees Fahrenheit. The strain’s plants grow short and bushy with strong lateral branches. They mature within 9 to 10 weeks and can offer a yield of between 42 and 46 grams per square foot of plant.

Pineapple OG’s wide-reaching effects make it of interest to both indica and sativa fans. The strain’s signature tropical flavour may also appeal to terpene connoisseurs.