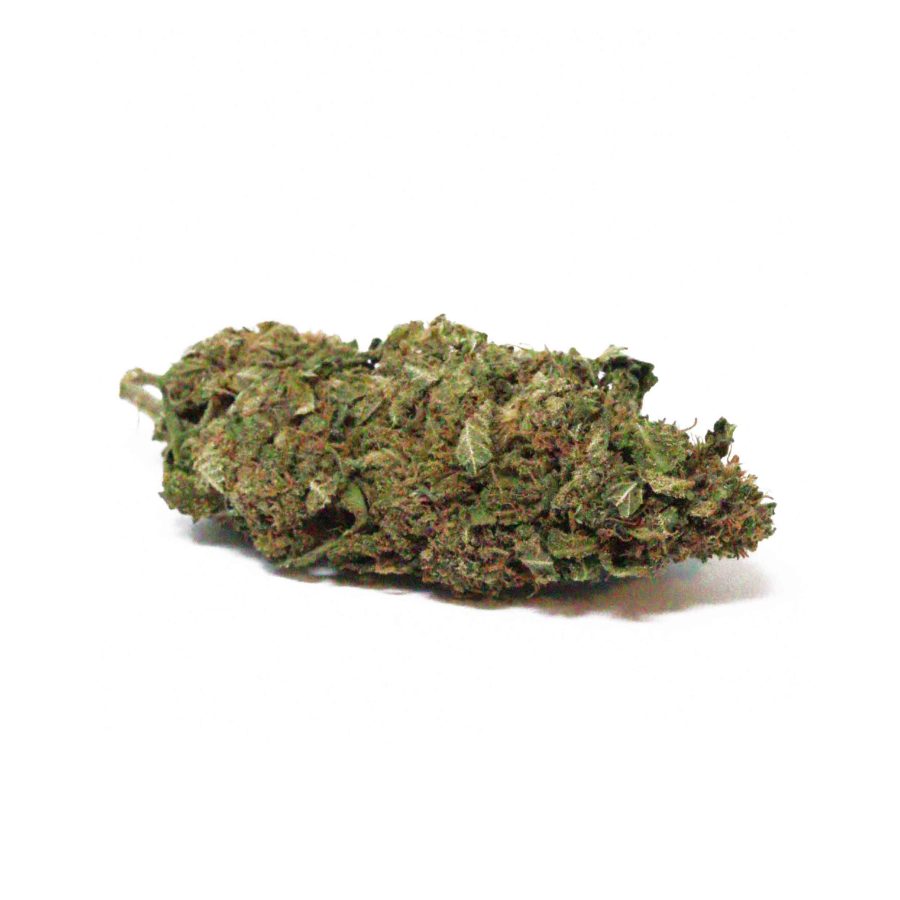 Sour Bubba takes the power of two popular staple hybrids to create a new and deeply sedative strain. This indica-leaning hybrid is a cross between stinky sativa Sour Diesel and ubiquitous Bubba Kush. With some early cerebral properties, a slow body melt, and a tangy, memorable aroma to round it all off, Sour Bubba makes a good all-purpose smoke. Its THC content has been reported at levels ranging from a modest 10% to a whopping 31%.

When trimmed, Sour Bubba is distinguished by small to medium flowers that maintain a round, elongated shape, somewhat like miniature cucumbers. These buds hold together densely at their center, but their leaves have a fluffy, piece appearance at their edges, spiralling loosely outward from their central stems. The leaves themselves are a mossy green and are twisted through with curly brown and orange pistils. Finally, resinous white trichomes ensure the sky-high potency and stickiness of these nuggets.

When properly cured, a dank and musky odour dominates the aroma of Sour Bubba’s flowers. There is also a light, herbal aroma, similar to lavender, lurking underneath these top notes. Grinding up the buds gives off the hash and incense scents that mark this strain as a true Kush. When burnt, the flowers give off a harsh, gasoline-tinged smoke that’s likely to trigger a coughing fit or watery eyes. This smoke tastes woodsy and spicy on the exhale.

Sour Bubba’s sativa side emerges quickly, exerting pressure around the user’s eyes and temples shortly after they’ve indulged in its harsh smoke. What follows is a focused, cerebral mindset that may cause smokers to lose themselves in concentration or in their newly-boosted stream of consciousness. Ideas may flow in rapid succession and free association, making this a great strain to enjoy before launching a creative project or a brainstorming session. Those less disposed to thoughtfulness or productivity will find themselves blessed by a warm, soft euphoria that takes the edge off of any earlier stresses or anxieties. As time passes, a palpable body high arrives to mellow out Sour Bubba’s initial mental engagement. A small tingle of relaxation begins at the nape of the neck and starts to spread down in waves, radiating outward through the core and limbs. Consumers may feel any lingering muscular tension dissipate and may notice that they are able to breathe more deeply and evenly. Sour Bubba’s emerging body high does not come at the expense of its earlier cerebral stimulation; in fact, the two manage to complement one another, allowing for a kind of relaxed awareness that makes a nice complement to activities like gaming, exercising, and even sex. As the high wears on, this physical relaxation can slip into a stronger kind of sedation, marked by laziness and body melt. Because of its slow decline into couchlock, Sour Bubba is best consumed between late afternoon and early evening, when its progression of effects can be fully appreciated.

Sour Bubba’s multilayered effects make the strain a versatile option for many different kinds of medical cannabis patients. Its sense of focus can be a boon to those with attention deficit disorders, helping them to concentrate on single tasks. Its mood-elevating properties can also temporarily lift the clouds of mild to moderate stress and depression. Physically speaking, Sour Bubba may dull pain that’s due to either injury or chronic conditions like arthritis and lupus. Its anti-inflammatory properties, meanwhile, can soothe minor irritations like indigestion or headaches. Because it can bring about some fairly intense cerebral thought patterns that may veer into paranoia, this train is not recommended for patients who are prone to panic or who have a low THC tolerance.

Seeds of Sour Bubba are available for purchase online. Once obtained, it can be grown indoors or out, although outdoor success calls for a semi-humid climate with daytime temperatures between 70 and 80 degrees Fahrenheit. These plants may grow medium-tall and may need to be pruned back now and then early in their vegetative life cycle in order to fit in limited indoor spaces. Sour Bubba flowers within 9 to 10 weeks when grown indoors.

Sour Bubba’s versatility makes it a great choice for indica and sativa lovers alike. While its tangy, sour aroma may be off-putting to some, the strain’s deeply therapeutic effects make it a taste worth acquiring.