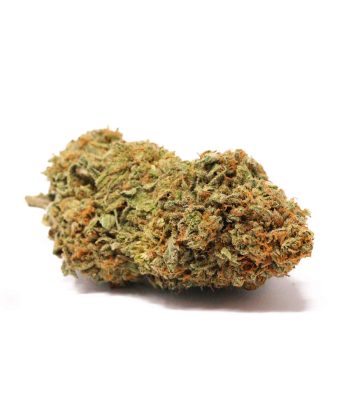 Tiger’s Milk is an indica-leaning hybrid with a dank, Kushy aroma and long-lasting sedative effects. It is the creation of Bodhi Seeds, the same breeders responsible for the fruity Sunshine Daydream. Tiger’s Milk is a cross between Bubba Kush and Bodhi’s own skunky hybrid Appalachia. It has a soothing, multi-faceted high that can be enjoyed in almost any circumstance. Cannabis testing lab Analytical 360 has found samples of this strain to have between 15% and 17% THC.

Tiger’s Milk grows solid, chunky flowers that are broad at their base and taper into a conical, spade-like shape. The flowers adhere in a dense, indica-typical bud structure, with leaves tightly coiled around their central stems. Leaves themselves are a bright shade of spring green and are threaded through with orange to brown-coloured pistils. Dewy trichomes cover the inner and outer surfaces of the flowers, giving them a super-sticky texture. Tiger’s Milk will remind many of its grandparent strain, OG Kush, with a pervasive hashy odour. Notes of spice and damp earth predominate, but there are also hints of lemon and aromatic herbs, reminiscent of tea. Breaking open or grinding the buds also reveals notes of spice and incense, a testament to Tiger’s Milk’s Hindu Kush landrace lineage. When combusted, Tiger’s Milk burns with a smooth smoke that is easily inhaled. Many smokers describe a creamy, dairy-like taste on the exhale — perhaps explaining the strain’s name.

This strain takes effect quickly, bracing smokers with a quick head rush that leads to some dizziness and euphoria. There may also be a discernible pressure around the eyes and temples. Distorted sensory perception may make some sights and sounds seem more amplified. These initial psychedelic effects can be a great way to enhance a favourite album or a trippy movie. While users may feel some sense of cerebral stimulation, Tiger’s Milk’s mental state feels more dreamlike than exacting and analytical. As the high wears on, Tiger’s Milk’s indica side sweeps in and takes over, conferring powerful relaxation. Users may feel a gradual release of physical tension and may find that they’re able to breathe more deeply and easily. The strain’s sativa side persists, though, keeping smokers alert and functional — even if they’ve taken up residence on the closest possible couch. As dosage is increased, Tiger’s Milk may lead to drowsiness and lethargy. Because of the relaxing (and sometimes incapacitating) effects that come through on its backend, Tiger’s Milk is more appropriate for the evening than for morning or afternoon use. This strain is praised by even experienced users for its potency.

Tiger’s Milk also has various applications for medical cannabis patients. Its thorough sedation can numb aches and pains, whether temporary or chronic, due to conditions like lupus or fibromyalgia. Anti-inflammatory properties can also soothe everyday annoyances like headaches or nausea. Psychologically speaking, Tiger’s Milk can help those with attention deficit disorders to sustain focus on single tasks. As noted, in high enough doses, this strain can also counteract insomnia and lull users into a deep and fulfilling sleep. Because Tiger’s Milk doesn’t often bring about paranoia, it can be great for those who are prone to panic or who have a low THC tolerance.

Bodhi has made seeds of Tiger’s Milk available for commercial sale. Once obtained, it can be grown indoors or out, although successful cultivation calls for a semi-humid climate with consistent daytime temperatures in the 70 to 80 degree Fahrenheit range. Plants can grow short and bushy with strong lateral branches and are easily accommodated indoors. Growers should be sure to regularly “top off” their plants and encourage maximum yield by trimming away any broad, light-blocking fan leaves. Tiger’s Milk flowers within 9 weeks when grown indoors and is ready for harvest in mid-October when grown indoors.

Tiger’s Milk slow-onset body stone is the perfect thing for kicking back after work, whether solo or with a small group of close friends. While it may not be the best choice for plowing through a detailed to-do list, it can be great for working on creative projects, as its effects can lower inhibitions and challenge conventional ideas.