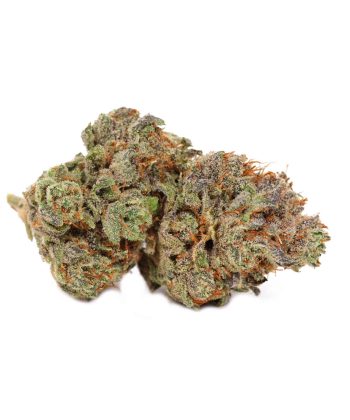 Alaskan Thunderfuck is a Sativa-dominant with a complicated genetic history. It is said to have originated in Alaska’s Matanuska Valley as a cross between an unnamed Northern California strain and an unnamed Russian ruderalis (a less-seen genus of cannabis distinct from either indica or Sativa). The child of these two strains was then crossed with an Afghani indica landrace to yield the potent staple that we know as Alaskan Thunderfuck. This strain confers a strong sense of mental focus alongside some subtle physical relaxation. The flower of Alaskan Thunderfuck has been tested at between 22% and 27%.

Alaskan Thunderfuck From Bulk Buddy sets itself apart with chunky buds that are medium to large and have a tapered, spade-like appearance. The leaves, which are a pale shade of sea green, have a fluffy look and feel and can be easily torn away from their central stems. Vibrant orange pistils wind their way through these pieces of leaves. Finally, a dense blanket of trichomes covers the inner and outer surfaces of the flowers, making them sticky and particularly hard to break up without the help of a grinder.

When properly cured, Alaskan Thunderfuck has a primarily woodsy aroma, redolent of pine and cedar. There are also base notes of damp earth, along with an indefinable nutty, chocolate-like scent. Only closer inspection, hints of lemon are present as well. When combusted, Alaskan Thunderfuck burns with a funky, acrid smoke that some may find objectionable or harsh. On the exhale, this smoke leaves behind an astringent ammonia tang accented by a lingering sour lemon taste. Smokers should keep in mind that this can be a very pungent strain when burnt; those looking to maintain discretion should take any needed precautions.

The high from Alaskan Thunderfuck is something of a creeper, often waiting until users have finished coughing or wiping away their smoke-induced tears to make its effects fully known. Smokers may detect by a gradually mounting alteration of the senses, with certain sights or sounds taking on a dynamic new significance. Once users acclimate to the change, this cerebral mindset lends itself to deep analytical thinking that can be valuable for working on problem-solving scenarios or as an accompaniment to free-wheeling creative brainstorming. In a more relaxed set and setting, Alaskan Thunderfuck can be a great complement to trippy music, as well as to engaging conversation between friends. As the high wears on, some subtle physical tingling sets in, although these effects are unlikely to cause disorientation or couchlock. In its later stages, Alaskan Thunderfuck may enhance more active pursuits like hiking; it can even be a strong aphrodisiac. A consummate Sativa, Alaskan Thunderfuck is a good option for the user who wants to maintain a clear head while going about their day. While it makes a great wake-and-bake strain, this is not a flower to be savoured just before bed, as it’s liable to leave smokers wide-eyed and wired. A small dose of this potent hybrid can go a long way, even for more experienced cannabis users.

Alaskan Thunderfuck’s wide-ranging effects can also have applications for medical cannabis patients. Its long-lasting lucidity may help those with attention deficit disorders to sustain focus on a single task. Its subtle mood enhancement can benefit users with mild to moderate stress and depression, leading them to spend their time more presently and mindfully. Physiological effects include some anti-inflammatory properties that can soothe headaches or nausea. Because its cerebral onset may lead to an out-of-control feeling of “mind race,” Alaskan Thunderfuck is not recommended for those who are prone to panic or who have a low tolerance for THC.

Many companies have produced seeds of this famous strain and made them available for sale online. Once obtained, Alaskan Thunderfuck can be grown indoors or outdoors, although outdoor cultivation calls for a warm, semi-humid climate with consistent daytime sunlight. As is typical of sativas, it has a long flowering time of about 9 to 10 weeks when grown indoors; grown outdoors, it is ready for harvest in mid-October. Alaskan Thunderfuck offers growers a high yield in reward for their efforts. Finally, just as it can be a pungent smoke, this hybrid can be a very pungent strain to grow — those looking to keep their cultivation operations discreet should invest in odour control measures like exhaust fans.

Revered among cannabis consumers, Alaskan Thunderfuck has even lent its name to drag queen superstar Alaska Thunderfuck  (who, for propriety’s sake, simply goes by Alaska). With a complex, surprising flavour profile and a lasting head high, it’s no wonder that this is one of the most popular Sativa in circulation today.